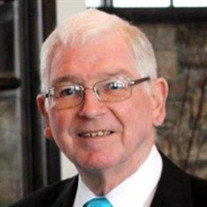 A. Lindsay Wiblin June 30, 1946-February 20, 2017 Lindsay passed away quietly on February 20, 2017 after a valiant battle with cancer. He was surrounded by his family. Lindsay was born in Durban, South Africa. He was the fourth of nine children and spent many of his younger years living on Ballard Street in the Point area of Durban. He attended Addington Primary School and Mansfield High School. As a child, Lindsay was instrumental in building a meeting house for the Durban branch. He spent his summer selling “bricks” to raise funds for the building. His efforts raised a significant sum towards building the chapel. He served for 9 months in the South African Defense Force and played the drums in the military band. During his teens and early twenties he participated in MIA and young adult activities and conventions. He made life-long friends during these adventures. Lindsay married the love of his life, Eleanor on November 4, 1967, and they were married for almost 50 years. They have 5 children, 19 grandchildren, and 5 great grandchildren. The family lived in the Glenwood area where Lindsay was involved in the parent volunteer organizations at the children’s schools. He worked in the steel industry and enjoyed success as he worked with customers. Many of these people have maintained their friendships through the years. Once the Johannesburg South Africa temple was built, Lindsay organized many temple trips for those in Durban to be able to attend the temple. He drove many groups 8 hours in each direction on these journeys. Lindsay and Eleanor lived in Durban until they immigrated to Provo, Utah in 1994. One of Lindsay’s proudest moments was becoming an American citizen and he gladly accepted the responsibilities that came with this privilege. He participated as a neighborhood chair for the Carterville District and ran for a city council seat twice. Lindsay will be greatly missed by his family, and the many friends that he has made. He has left a lasting legacy that includes kindness and friendship to all that he encountered. Many family, friends, and even strangers have lived in the Wiblin home and enjoyed the unlimited generosity that Lindsay showed. In lieu of flowers please contribute to Benjamin Wiblin’s (grandson) project to visit Washington D.C. to attend a leadership conference. https://www.gofundme.com/ttaq7c-global-young-leaders-conference Funeral services will be held Saturday, February 25th, 1:00 pm at the Grandview East 3rd Ward, 900 W. 2150 So. Provo, Utah. A gathering will be held from 11:30 am – 1:00 pm prior to services at the church.

A. Lindsay Wiblin June 30, 1946-February 20, 2017 Lindsay passed away quietly on February 20, 2017 after a valiant battle with cancer. He was surrounded by his family. Lindsay was born in Durban, South Africa. He was the fourth of nine children... View Obituary & Service Information

The family of A. Lindsay Wiblin created this Life Tributes page to make it easy to share your memories.