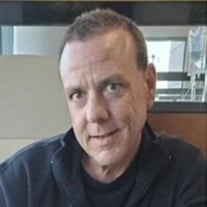 Adam J Hopfensperger (also known as AJ and Apple Jack) was born on April 3, 1973 and passed away January 25th, 2021 after a valiant 18-month battle with Extensive Small Cell Lung Cancer. Near the end Adam found solace in knowing that he would be greeted by his parents, Kenneth and Barbara Hopfensperger to continue his journey. Adam is survived by his two children, Addison and Ashleigh Hopfensperger. He had five siblings. Doreen Van Dyke (Scott), Angelia Brenner (Gary) Julie Younger (Christopher) Barbara Dalton (Brent) and his brother Kenneth Hopfensperger. Adam was blessed with many nieces and nephews. Krystal (Nathan) Grace, Kristie, Curtis, Gary II, Christopher (Crystal), James (Jessica), Samantha, Brenna, Monica and Myah. If that weren’t enough Adam also had many great niece and nephews. Madison, Charlotte, William, Mirella, Danielle, Hayden, Mila, Mason, Emma, Devonea, and Julianna. He is also survived by many Aunts, Uncles and cousins. Adam was born in Milwaukee WI. He grew up in Mequon WI and graduated from Homestead High School in 1992. Adam was quite a character. As a little boy he could always be counted on to catch tad poles, ride big wheels, build forts in the woods and climb trees. He was a sensitive kid that loved animals and his family. He was truly a gentle soul. Adam moved to Salt Lake City, UT in 1999 after visiting his sister Barb and falling head over heels in love with the majestic beauty of the mountains. As he got older if he wasn’t bowling, playing pool or fishing he was probably enjoying a cocktail. Adam did enjoy his spirits. He was a huge football fan and cheering on the Green Bay Packers was a holiday every game they played at his house. He still enjoyed climbing trees! He also loved playing cribbage and was still playing and sharp as ever until his final days. He started his career in travel with IHG Resorts where he met and later married Amanda. Although they divorced, they shared equal custody of their two children until he fell sick and then he took them whenever he was physically and mentally able to do so. He truly loved his children. He was a great Dad. He enjoyed playing Chess with his son and was so proud of how good Addison was and even boasted about the first time Addison won against him. His favorite time of the year was Valentines when he got to bring Ashleigh to the Daddy/ Daughter dance at her school. He always made a huge deal of it. They were so cute together and he proudly displayed the pictures in his home year after year. Adam found a second family when he started working as a Travel Agent for CHG Healthcare. He was overjoyed with his employment as a Travel Agent for traveling Doctors. He was so proud of his job. He talked about the loving and caring atmosphere of his team or what he called his “Work Family” any time he got a chance. They have continued to check in with Adam and his family, always asking what they could do to help. What a wonderful group of people. They loved him and he loved them. After being diagnosed Adam spent a lot of his time painting, sketching and carving (then painting) walking sticks. He was very artistic and it kept him moving forward and his mind in a positive place. He never gave up. He really never complained or felt sorry for himself. He just kept hoping for the best and talking about all of the things he was going to do when he got better, which was mostly fishing with his kids. He was a pretty amazing brother. Not only to our family but to his brother-n-law Brent. Many a Sunday they could be found watching the game, playing cornhole, talking football, throwing the ball around, shooting some hoops, celebrating victories and supporting each other through a loss or soaking in the hot tub. Adam was the kind of guy who would give the shirt off of his back to someone that was cold. He talked often about his sadness at the situation of the less fortunate and gave what he could when he could. He was one of the good ones. He will be forever missed. If you would like to send a condolence you can post online or to send a card to the family of Adam you can send it to: Premier Funeral Services C/O Adam Hopfensperger Family, 67 East 8000 South, Midvale UT 84047 In lieu of flowers please consider a donation to The Inn Between in Salt Lake City, UT (Tibhospice.org). They made his last week as pain free as possible, treated him with respect and dignity and allowed his family to be with him in his final hours. Also, please consider The Road Home Homeless shelters in Salt Lake City (theroadhome.org) or your local homeless shelter. Any other donations to the family will be used for final expenses and added to a trust fund for his children but are not necessary. Funeral services to be held at a later date. Information to follow.

Adam J Hopfensperger (also known as AJ and Apple Jack) was born on April 3, 1973 and passed away January 25th, 2021 after a valiant 18-month battle with Extensive Small Cell Lung Cancer. Near the end Adam found solace in knowing that he would... View Obituary & Service Information

The family of Adam J Hopfensperger created this Life Tributes page to make it easy to share your memories.