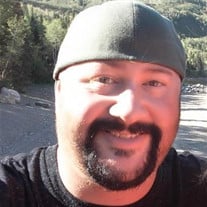 Adam Dean Ross March 09, 1974- December 10, 2017 Adam Dean Ross March 09, 1974- December 10, 2017 Adam passed away unexpectedly on Sunday December 10, 2017. He was born on March 09, 1974 to Kenneth and Claudia Ross. He was such a strong and caring son that was always there for his family whenever they needed him. Adam had such a great sense of humor he could always make you laugh until your stomach hurt. He loved to fly fish with his father& brother and was so happy when he had a son to teach too! He was the best husband, father, son, brother, uncle & friend to many who knew him. We are sure going to miss his ability to liven up the room. Adam married Victoria Howland on December 09, 1995 and together they raised two great kids, Trevor Adam Ross followed by a daughter Brooke Linda Ross. Adam loved his kids with all his heart. He was such a fun dad, always there for his kids, whenever they needed him! He was constantly coming up with new and creative ways to make his children smile; from building giant snow slides in his back yard to putting together elaborate and frightening Halloween costumes. Adam always used his creativity and artistic ability to bring smiles to those around him. Adam was preceded in death by: His Grandparents Dean & Rhea Robinson, LeLand & Kathryn Ross. Adam is survived by: His wife Victoria, children Trevor & Brooke Ross. Parents: Kenneth & Claudia Ross. Brother Robin (Linda) Ross, Sister Heidi Ross, Sister Tiffany (Dustin) Everett, Sister Eve Lakey, Mother & Father in-Law, Linda (Don) Hodges, Sister-in-Law, Darleen (Adam) Palmer, Brother-in-Law Tim Howland, Brother in-Law SKye Hodges, Sister-in-Law Heather Hodges, Brother-in-Law D.J. Hodges & 15 nieces, 13 nephews. Private Viewing for those invited will be held Friday, December 15, 2017. Celebration of Life will be held at Sandy LDS church, 8735 Harvard Park Drive at 11:30 a luncheon at 12:30.

The family of Adam Dean Ross created this Life Tributes page to make it easy to share your memories.