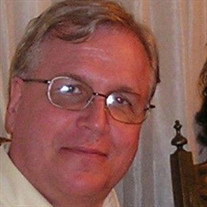 Alan Gardener 1955 – 2021 Alan Forest Gardener, born Lawrence Lindley (Larry) Haworth, died on January 27 after he was struck by a car in Provo, Utah. Alan is predeceased by his wife Patricia "Hattie" Haworth and his mother Helen Ellis. He will be missed by his father Larry Haworth; step-mother Alison Pedlar; sister Ruth Ellis Haworth; sister-in-law Shirley White; niece Denise Lynch; sister-in-law Lena Stevenson; and brother-in-law Myers R. Pope Jr; friend Connor Winters; and many other friends and family. Alan was born in Lafayette, Indiana. His family emigrated to Canada when he was ten and he spent the rest of his childhood in Waterloo, Ontario. He attended school at MacGregor, Waterloo Collegiate, College du Leman, Bluevale Collegiate, the University of Waterloo, and Wilfrid Laurier University. As an adult he lived in Toronto, Los Angeles, and Seattle, eventually settling in New Carrollton, Maryland, where he set up databases for minority-owned not-for-profits. Alan was diagnosed as Bipolar. He struggled with mental illness for all of his adult life. Despite therapy and medication, his condition prevented him from graduating from university and caused him to leave many jobs. He was relentless in analyzing his condition, discovering ways to cope, and conferring with others who had similar problems. Eventually he was able to help many other people. Everyone who knew Alan knew that he had an extraordinary mind. He wrote poetry, enjoyed mathematics as a hobby, sketched, and was an avid reader. He seemed always to be singing. He loved nature, as was reflected in the name he chose for himself, and most of all he adored his late wife Hattie. Quite unexpectedly, the top blew off -Archibald MacLeish, The End of the World In lieu of flowers, please donate to the National Alliance on Mental Health (https://nami.org/) or the Canadian Mental Health Association (https://CMHA.ca/)

The family of Alan Gardener created this Life Tributes page to make it easy to share your memories.