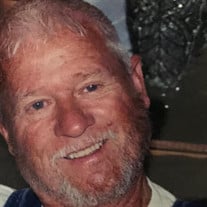 Albert Leroy Gonser, 81, beloved husband, father and grandfather passed away on Friday, January 22, 2021 after a short illness. Al was born on April 13, 1939 in Mooreland, Oklahoma to parents Albert and Leveda Davis Gonser. He joined the United States Air Force, at the age of 18. During his military service, he was stationed in Las Vegas, Nevada. Upon his honorable discharge he left Las Vegas and moved to Hutchinson, Kansas where he met Nadine Joyce Sayler. They decided to get married and move to Las Vegas, where it was warm and provided lots of life opportunities. Together they are the parents of three children. Al was very driven, he worked and played hard, and was a great provider to his family. He was a mechanic by trade and a successful business owner, owning A-1 Auto Wrecking, for many years. He eventually sold the business and retired to White Hills, Arizona. Al was very competitive and in his younger years he loved to race his dune buggy (Nellie Bell). He won the first Snore 250 in the Nevada Desert. He was a private pilot, owned several airplanes and had a profound love for flying and living in the desert heat. He enjoyed his morning Pepsi, soaking up the Arizona sun in his hammock, going to the weekend auctions, collecting many cars and restoring his 33 Plymouth. Al is survived by his daughters, Alicia Kandel, Lyn (Mike) Daybell and Echo Everakes; six grandchildren, Heather, Hannah, Sami, Scott, Danielle and Ryan; two great grandchildren, Jordy and Josie and a sister Patricia Kilpatrick. He also leaves behind many other family members and friends who loved him and will miss him. He is proceeded in death by his parents, brothers (John & Herb) and his wife, Nadine. Our hearts are broken but he leaves us with a legacy of strength, hard work, skill and determination. He will be forever missed!

Albert Leroy Gonser, 81, beloved husband, father and grandfather passed away on Friday, January 22, 2021 after a short illness. Al was born on April 13, 1939 in Mooreland, Oklahoma to parents Albert and Leveda Davis Gonser. He joined the... View Obituary & Service Information

The family of Albert Leroy Gonser created this Life Tributes page to make it easy to share your memories.