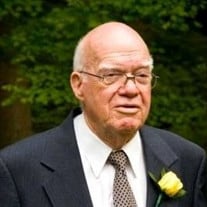 Albert Eugene Lyons passed away in his sleep on February 2, 2018, in Cedar Hills Utah, from causes incident to age. He was 89. Gene was born on July 24, 1928, in Weiser, ID, to Albert Rice and Ida Ann Despain Lyons. He was always thrilled that there was a parade on his birthday. He was a courageous man who had a wonderful, eventful life, and was, among others, a U.S Marine, a missionary, a crack shot, a fighter, a hunter, a pilot, a navigator, a builder, a friend, a traveler, and a life-long student. He retired from the military as a Lt. Colonel in the Air Force. He earned a Bachelor of Science (in zoology) from BYU and a Masters of Arts (in Public Administration). He received 19 medals including the Silver Star, two Distinguished Flying Crosses, and a Bronze Star. He was decorated for "Gallantry in action against an enemy of the United States", "Heroism", "Valor", and "Meritorious achievement". He was married to Maurine Maxfield on June 7, 1957. She passed away on Sept. 16, 2003. They were as happily married as it is possible to be and are now reunited after 14 years apart. Gene leaves behind a sister, Ida Gigger, 7 children: Genie (George Blair) of Portland, OR; Jon K. (Sylvia) of Redding, CA; Jeffrey E. (Joanna) of Cedar Hills, UT; James C. of Portland, OR; Michael D. (Jeana) of Pleasant Grove, UT; Richard T. (Betsy) of Logan, UT; and Lisa L. Van Tassell (Cameron) of The Republic of Palau; 26 grandchildren; and 6 great-grandchildren. He is remembered by all as a great father, and a loving, kind, and considerate grandfather. He was deeply religious and served three full-time missions for the LDS Church, the first to Eastern Canada, and the second two with his wife in New York City and St. Louis. Family and friends are invited to attend on Tuesday, Feb. 6, from 6:00 to 8:00 p.m., and Wednesday from 9:30 to 10:30 a.m. at the Grove Creek 2nd Ward, 475 N 700 E, Pleasant Grove. Funeral services will be held on Wednesday, Feb. 7, at 11 a.m. at the church. Interment, Provo City Cemetery.

Albert Eugene Lyons passed away in his sleep on February 2, 2018, in Cedar Hills Utah, from causes incident to age. He was 89. Gene was born on July 24, 1928, in Weiser, ID, to Albert Rice and Ida Ann Despain Lyons. He was always thrilled that... View Obituary & Service Information

The family of Albert Eugene Lyons created this Life Tributes page to make it easy to share your memories.