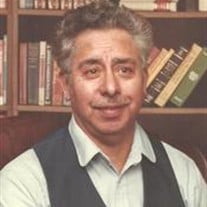 He was born Pumendiro R. Medel on August 14th, 1921 to Joseph and Tomasita Rodriquez Medel in Delta Utah but baptized as Albert at Salt Lake’s Cathedral of the Madeleine in December. Albert was part of what is properly called the Greatest Generation. He wanted to study but was required to join his father working in the fields for many hours and little reward, so at age 14 he and his younger brother Ray ran away. They worked, wandered in both the U.S. and Mexico as they learned to support themselves and each other. He joined the Army after the start of WWII and although he received mechanical training, he fit nicely in the rear turret of the B-24 Liberator and flew on 50 combat missions over Southern and Central Europe. He married Susan Cabrera in August of 1949 in Santa Cruz, California. They settled in Los Angeles, to start their family while he worked for McCulloch and started pre-law studies at night. Unfortunately, L.A. basin air quality was damaging his lungs and in 1956 the family relocated to Salt Lake City to be near their large extended and loving families. He looked forward to family parties where they could share their stories and music. In Salt Lake Albert worked as a machinist for Gallagher Co., dreamed big dreams and spent many happy vacations camping, fishing and enjoying the outdoors with his family. With Susan by his side they would smile and occasionally dance through the night. He bought land in what is now West Valley where they grew large gardens and raised beef for the family table. He enjoyed horse races, handicapping as successfully as any of his grandchildren. After years working for other people, he and his younger brother Ray started their own business. M&M Machine both struggled and flourished for several years before they moved on. With mills and lathes in his own garage, Albert continued to do quality, precision machine work into his 80’s. His death early on December 17, 2012 was preceded by 7 brothers and 5 sisters. He is survived by his sister Connie, his wife Susan, children; Daniel, Lydia, Linda and Albert, lots of grandchildren and great grand children. A viewing will be held at St. Francis Xavier Church, 4501 W. 5215 South, Kearns Utah on Saturday, December 22nd at 10:00 AM, followed by Mass at 11:00. A short graveside ceremony will follow at Valley View Memorial Park. While Susan and Daniel were the primary day-to-day caregivers for Albert for the last year, the family wishes to thank the nurses and aides from home health care and hospice who made the last few months of his life much more comfortable.

He was born Pumendiro R. Medel on August 14th, 1921 to Joseph and Tomasita Rodriquez Medel in Delta Utah but baptized as Albert at Salt Lake&#8217;s Cathedral of the Madeleine in December. Albert was part of what is properly called the Greatest... View Obituary & Service Information

The family of Albert Medel created this Life Tributes page to make it easy to share your memories.