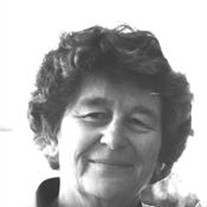 Alberta Parker Horn (Dr. Alberta Parker), age 94, died in comfort and surrounded by love at Park Lane Senior Living, Salt Lake City on January 30, 2012 of natural causes. Alberta graduated from Kern County Union High School, Bakersfield, CA in 1934 and University of California, Berkeley in 1938. She attended medical school at UC San Francisco, where she graduated in 1941. Dr. Parker established a pediatric practice in Berkeley, CA in the late 1940s. During the 1950s her career focus shifted to public health. She was director of maternal and child health for Berkeley public schools and assistant health officer for Berkeley's health department. She was appointed Clinical Professor of Public Health at UC Berkeley in July 1969 and was an educator at UC Berkeley until she retired in 1976. During President Johnson's War on Poverty, Dr. Parker served as consultant to the newly formed Office of Economic Opportunity, where she assisted with formation and early operation of community-based neighborhood health centers throughout the United States. Dr. Parker's monograph A Team Approach to Primary Care was published in 1972, with a focus on cooperation among physicians, nurse practitioners, and registered nurses within an integrated delivery framework. Alberta is preceded in death by her husband of 46 years, Walter Horn, whom she married in 1949 and who died in 1995. She is also preceded in death by her son Peter. She is survived by brother James Parker of Murraysville, PA; daughter Rebecca of Salt Lake City and her husband Stanley Holmes; son Michael of Chicago and partner Kenneth Ochsenhofer; daughter-in-law Teri of San Anselmo, CA; and by two grandchildren, Matthew Horn and Dulce Maria Horn. Alberta was passionate in her interest in the world. She loved travel and she had a special love for the Great Basin, where she eventually moved when she could no longer live on her own in California and needed to be near her daughter and family. She was an avid "collector", with eclectic tastes ranging from early California painting, to Eskimo sculpture, as well as art pottery. She enjoyed simple pleasures such as hiking and sightseeing in car trips, and even picking up interesting rocks and pine cones at the side of the road. The family wishes to express deepest gratitude to Alberta's loving caregivers and to Utah Hospice Specialists. The family will receive visitors from 4:00 to 8:00 pm on Friday at Little America Hotel. A celebration in honor of Alberta's life will be held at a later date in her home in Point Richmond, CA.

The family of Alberta Parker Horn created this Life Tributes page to make it easy to share your memories.