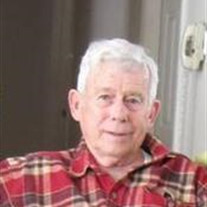 On Thursday, June 28, Alexander Woodman Bigney- “Bud” to his friends and family, peacefully passed into the arms of his wife Rose. Bud’s life was filled with adventure and change, from his beginnings as a poor Nova Scotia farm boy, into a juvenile delinquent, a soldier, a husband, father, craftsman, bagpiper, businessman, educator, bishop, father, grandfather and great-grandfather to many. Born on December 13, 1925, in Boston, Mass, he moved with his mother to the hills of Nova Scotia, Canada, near the city of Halifax. There he spent his youth and adolescence, drawing water from a spring and plowing the small hilly farm with oxen like farm boys of centuries past. Winter for the Bigneys usually saw the family living in a small cabin which was heated with wood and poorly supplied with groceries. From this beginning Bud left home as a teen ager, eventually joining the American army. He made his way to Europe as World War II ended and was assigned to guard prisoners of war in Mannheim, Germany. After serving the country of his birth, Alex returned to Boston and married Rose Stacishin, also of Boston, a union which brought forth five children; Alexander William, Nicholas Daniel, Hugh Duncan, Rosemary, and Elizabeth Alexia. As a young father Bud learned the trade of metal spinning, and thereafter became the president and owner of New England Metal Spinning Inc, of Malden Mass, one of the largest firms of its type in the country. He grew to become active in his religion and eventually served as Bishop of the Lynnfield Ward of the Church of Jesus Christ of Latter Day Saints. In 1974 he sold his company and bought a farm in Missouri, returning to his agrarian roots. From there he moved to Utah to serve as an instructor at the Utah Technical College. Finding the life of an educator boring, he left the college to once again start a business in Utah, becoming an owner of DMW Products of Orem, a high tech manufacturing firm. With his wife Rose he served an L.D.S. mission to Kiev Ukraine, and finally retired to his Woodland Hills home to pursue his hobby of Violin making until the recent death of his companion Rose. He treasured his grandchildren and their accomplishments, always trying to be involved in their lives. Bud’s life will always be remembered by his friends and family as a monument to the courage to change and grow from humble circumstances-- the apple named Alexander Woodman Bigney fell quite far from the tree. A viewing for friends and family will be held on Tuesday, July 3, at the Mt Loafer Chapel, 1275 South 250 West in Salem, Utah, from 9:00 to 11:00 AM, after which a funeral service will convene at 11:30 AM at the same location.

On Thursday, June 28, Alexander Woodman Bigney- &#8220;Bud&#8221; to his friends and family, peacefully passed into the arms of his wife Rose. Bud&#8217;s life was filled with adventure and change, from his beginnings as a poor Nova Scotia... View Obituary & Service Information

The family of Alexander Woodman Bigney created this Life Tributes page to make it easy to share your memories.