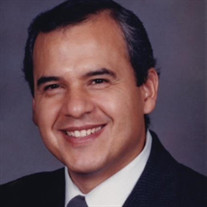 Alfonso Juarez Flores May 13, 1949–December 27, 2021 Beloved husband, father, grandfather, brother, artist, teacher, and friend. Alfonso Juarez Flores was born to Gonzalo Flores and Maria Ines Magallanes in Torreón, Coahuila, Mexico on May 13, 1949. The first surviving child of a large family, he grew up in Mexico with his parents and his aunt’s family. He was an artist from the time his mother first gave him art supplies at the age of six. In 1970 Alfonso received an elementary school teaching degree from Benemérito de las Américas (a school operated by the Church of Jesus Christ of Latter-day Saints) in Mexico City. He emigrated to the United States to attend Mesa Community College in Arizona and was later an instructor of folk dancing and a professional folk dancer. He earned a Bachelor of Fine Arts in Painting and Drawing from Brigham Young University in 1980 and a Master of Fine Arts in Painting and Drawing in 1983. Alfonso’s pride and joy was his family, which he raised in Provo and Orem, Utah. He first met Bridgett Benson in 1975 at a Church Christmas party, and they were later sealed in the Salt Lake Temple. They have three children with talents in the arts: Nicole (Brandon) Gunn, Ryan (Tricia) Flores, and Michelle (Wes) Lapioli; and eight grandchildren. We love him so much. He will be greatly missed by all. We find solace in the knowledge that families can be together forever, and that we will see him again. Alfonso was ordained a high priest in the Church of Jesus Christ of Latter-day Saints when he was in his 30s. He was a faithful member of the Church and held many different callings. Alfonso’s career was dedicated to Brigham Young University. As a BYU student he worked as a chef for their Food Services and as an illustrator and graphic artist for the Missionary Training Center. He later started a long tenure working for Independent Study and the Department of Continuing Education in Visual Communications as a graphic designer, illustrator and photographer and as the senior creative lead on the Web team. He was also an adjunct faculty member in the Department of Fine Arts and enjoyed teaching painting to young adults. Although his specialty was landscape oil painting, Alfonso loved and encouraged all types of art. He was constantly drawing and sketching. He liked to watercolor and do computer art with his artistic grandchildren. He was interested in rock collecting and metalsmithing. As a young man, he participated in many art exhibits. An avid sports fan, Alfonso regularly followed BYU basketball and football games, as well as the Utah Jazz. He loved old cowboy Westerns, space movies, the ocean and water, the martial arts and their philosophies, and was a student of karate. He enjoyed listening to music and playing his guitar. He was an amazing chef and always made breakfast and Mexican meals for his family. In retirement, Alfonso had more time to focus on watercolor painting and oil painting. He built a new home studio, worked in his beautiful yard, and played with his grandchildren. A theme for Alfonso’s life and one of his favorite songs was “What a Wonderful World” by Louis Armstrong. Alfonso passed away peacefully on December 27, 2021, surrounded by family and friends. His memory will be cherished by his four surviving sisters: Malena, Maru, Monica, Bety and three brothers: Blas, Gonzalo, Gabriel. There will be a remembrance of his life for his Spanish speaking family and friends over Zoom. Alfonso requested that there be no funeral. A private graveside memorial service will be held at a future date.

The family of Alfonso Juarez Flores created this Life Tributes page to make it easy to share your memories.