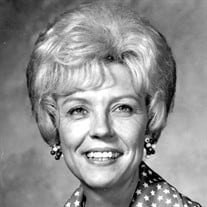 Alice Elizabeth (Harding) Derr 1935 – 2019 Alice Elizabeth Derr, age 84, of Layton Utah, returned home to her Heavenly Father on September 17, 2019. Alice was born on February 14, 1935 to Albert Talmage Harding and Ethel Flygare Harding in Lehi, Utah. She gave birth to her first child Carrie Clegg (Dixon) in October 1954. Alice married Harold Robert Derr on September 23, 1955. During their marriage they had five children; Mary Kathryn, Natalie, Stephanie, Jacob, and Kimber as they traveled the world while Harold served in the United States Air Force. They were later divorced. Alice loved her piano and was an accomplished pianist who enjoyed many types of music. She was also a talented seamstress and made many of her own clothes as well as dresses for her daughters when they were young. Alice also enjoyed family history and collecting family stories. Alice is survived by two brothers, Jack (Dorit) Harding and Doug (Evelyn) Harding, 5 of her 6 children Mary Kathryn (Lar) Seaver, Natalie Derr, Stephanie (Glen) Godfrey, Jacob Derr, and Kimber (James) Selfaison, 20 grandchildren and 15 great-grandchildren. She was preceded in death by her mother and father, six brothers and three sisters, and a daughter. Thank you to all family, Ward members, doctors, nurses, CNAs, Meals On Wheels, and Hospice who lovingly cared for Alice. Graveside funeral services and interment will be held 10:00am Saturday September 21, 2019 at Provo City Cemetery 610 S State Street, Provo, Utah. For obituary and condolences for the family go to www.premierfunerals.com

The family of Alice Elizabeth Derr created this Life Tributes page to make it easy to share your memories.