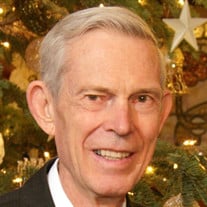 Allan Lorenzo Murdock, age 81, passed away from pneumonia at St. Marks Hospital in Salt Lake City on Thursday, March 15, 2018. Allan was born December 4, 1936 in Sugar City, Idaho to loving parents, Ezra Allan Murdock and Mattie Fitzpatrick Piquet Murdock. After graduating from Teton High School in 1955, Allan served as a full-time LDS missionary in the Great Lakes Mission from 1957 to 1959. He married the love of his life, Irene Burke, in the Idaho Falls Temple in 1961. He was a devoted husband and loving companion. For the past 56 years, he and Irene treasured their time together and created a loving home for their three children. After serving on Active Duty in the National Guard in Fort Lewis, Washington from 1961 to 1962, Allan graduated with a bachelor’s degree in Accounting from Brigham Young University in 1963. He was a Certified Public Accountant who worked for Peat, Marwick, Mitchell & Co. (now KPMG) in Salt Lake City and later as a Controller in the Welfare Department of the LDS Church until his retirement in 2003. Sharing in their mother Irene’s sorrow but determined to build on their father’s legacy of faith and selfless service are their children Janet (Jim) Thomas of Pleasant Grove, Mark (Jennifer) Murdock of South Jordan, and LeAnn (Paul) Miller of Mapleton. Saddened by the loss of their grandfather are nineteen grandchildren and ten great-grandchildren. Allan’s life was characterized by steadfast optimism, unassuming service, and devotion to the Gospel of Jesus Christ. His character was founded on the principles of thrift and industry. Allan served willingly in many capacities in the LDS church, including ward clerk, stake missionary, and family history consultant. He and his beloved wife Irene served two church missions together: the first in the Church Archives from 2003 to 2004 and the second as full-time missionaries in Madison, Wisconsin from 2005 to 2006. Allan took great pride in the choices of his children and grandchildren to follow the Savior. Allan was the second of four children. He is survived by his sister Mary Jean (Dix) Waddell of Friendswood, Texas; sister-in-law Connie Murdock of Idaho Falls; and brother Don (Kathy) Murdock of Pocatello, currently serving a full-time mission in Mexico City. Allan was preceded in death by his parents and his brother Frank Murdock of Idaho Falls. Funeral services will be held Friday, March 23 at 11:00 am at the Cottonwood Heights 2nd Ward Chapel, 6890 South Whitmore Way in Salt Lake City. Viewings will be held Thursday evening, March 22 from 6:00 to 8:00 pm and Friday morning from 9:30 to 10:30 am at the Cottonwood Heights 2nd Ward. Interment will be Saturday, March 24 at 1:00 pm at the Taylor Cemetery in Shelley, Idaho.

The family of Allan Lorenzo Murdock created this Life Tributes page to make it easy to share your memories.

Allan Lorenzo Murdock, age 81, passed away from pneumonia at...