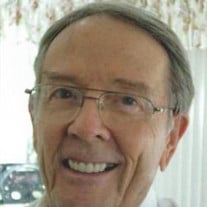 Allen Dayle Carlson was 89 ½ years old when he progressed joyfully to the next life on June 3, 2015. He was born January 28, 1926, in Los Angeles, Calif. To Alvin W. and Jennie Mann Carlson. The third of four sons. After graduating from Fremont High School he was drafted into the Army. He served in the 97th Infantry Division in Germany, Czechoslovakia, and Japan during WWII. After the war he served an LDS mission to East Central States, it was there that he met Belva Scott whom he married March 23, 1951, in the Salt Lake Temple. She passed away November 13, 2010, and Allen was never quite the same. Together Allen and Belva served two full-time missions. They went to Paraguay in 1981, and to the Atlanta Temple in 1988. From his missions he gained a love for the Spanish language and for talking “Southern”, and would use both frequently. He felt that every couple should serve a mission. The first half of his life was in the Los Angeles area. He worked for 30 years for North American Aviation/North American Rockwell/Rockwell International as a facilities planner. He retired at age 55 to serve a mission. After their mission to Paraguay they relocated to West Jordan, Utah. Here they served for many years as temple workers in the Jordan River Temple. He loved the out of doors; the ocean and the mountains. Allen was inventive and creative and made all kinds of gadgets to make things work “better”. The thing he loved most was his family, his sweetheart, Belva, his children and their families and his large extended family of cousins, nieces and nephews. He especially loved his ancestors and was proud of his Swedish roots. He encouraged everyone to do Family History. He was very proficient on the computer and helped many find their ancestors. He is survived by daughters, Janeen and Mo Myers; Kristie and Jerry Morton, daughter-in-law Angie Carlson; 9 grandchildren, 16 great grandchildren, and brother Gary. He was preceded in death by wife Belva, brothers Reg & Stan, son Reed who, as Allen liked to say, “progressed” just this past February, and 1 grandson. We will celebrate his life Monday and wish him “adios” June 8, 2015, at 11:00 am at the Mountain Shadows 7th Ward, 7903 S. 2700 W., West Jordan. Visitation will be from 9:30 – 10:45 am. Interment will be in the West Jordan City Cemetery.

Allen Dayle Carlson was 89 ½ years old when he progressed joyfully to the next life on June 3, 2015. He was born January 28, 1926, in Los Angeles, Calif. To Alvin W. and Jennie Mann Carlson. The third of four sons. After graduating from... View Obituary & Service Information

The family of Allen Dayle Carlson created this Life Tributes page to make it easy to share your memories.

Allen Dayle Carlson was 89 &#189; years old when he progressed joyfully...