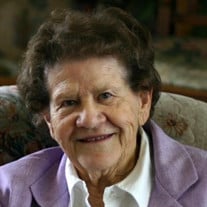 Alma Snow Whiting 1926 - 2017 Alma Snow Whiting, of Mapleton, Utah, died on May 15, 2017. She was born on December 18, 1926 in St. George, Utah, and was the 5th of 6 children. She was the only daughter of Karl Nelson Snow and Wanda McGregor. Though her father died when she was only 3, her remarkable widowed mother single-handedly raised 6 children. At the age of 10, Alma moved with her family to Provo, Utah, where she attended Dixon Junior High, BYU high school, then BYU - graduating with a BS in English. At BYU she served as White Key Honorary President, Associated Women's Vice President, and President of Nautilus Social Unit. Alma loved playing the violin in BYU's symphony orchestra. During these busy University years, she waited anxiously for the return of a special missionary named Oscar Juan Whiting, who was serving in South Africa. Alma married Juan Whiting in the Salt Lake City temple in 1949. From that moment on, her husband, family, and Church became top priorities. Juan and Alma worked beside their children on their farm, always teaching and providing a strong gospel foundation. There was always room in her heart for every special grandchild, and at the time of her passing, she was the proud grandma of 63 grandchildren, and 113 great-grandchildren. Service in the Church of Jesus Christ of Latter-day-Saints was a joy to her. She served faithfully in ward and stake positions. However, her greatest love was serving with her husband on two missions to Cape Town, Africa, and Zimbabwe. She used her musical talents to direct music and play the violin at many events. Our mother has always treasured her pioneer heritage. She spent long hours writing and compiling her own personal history, and the history of her mother and grandmother. Preceding Alma in death are her father and mother, Karl N. and Wanda M. Snow; 4 brothers, Don, Anthony, Ellsworth, and Shipley; husband, Oscar Juan; sons, David and Mark; 4 grandchildren, Christopher, Julia, and Lynzy Whiting, and Carder Doman. Surviving is 1 brother, Karl Snow (Donna), Provo; her children, Shelie Doman (Dee) - serving LDS mission in Nova Scotia; Judy Richardson (David), Perry; Mary Judd (Robert), St. George; Kaye Romney (Ben), Rexburg; Paul Whiting (Sherri), Springville; Brent Whiting (Laurie), Mapleton. Deepest appreciation to Valero Hospice, for their loving care - especially Denise Scott, Renee Collin, Lesa Kapt. Funeral services will be 11:00 am, Saturday, May 20, 2017 at the White Chapel, 31 West Maple Street, Mapleton, UT where a viewing will be Friday from 6:00 to 8:00 pm and Saturday prior to services from 9:00 to 10:45 am.

The family of Alma Snow Whiting created this Life Tributes page to make it easy to share your memories.