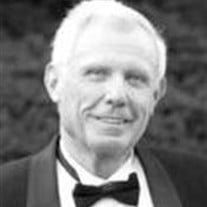 Alonzo Blaine Huntsman Jr., beloved father, husband, grandfather, brother, mentor, fisherman and friend, passed away on November 8 after a seven month battle with pancreatic cancer. He was 76 years old, surrounded by family at his home in Sandy Utah. We miss him acutely and are grateful to have shared his life. We will always honor his legacy. Blaine was born to A. Blaine and Kathleen Robison Huntsman in Fillmore, Utah on May 26,1936. He was raised in southeastern Idaho, Fillmore, Utah, and Palo Alto, California but spent the majority of his adult life in Salt Lake City, Utah. Beginning at 10 years of age, Blaine and his brother Jon worked together tirelessly at multiple full-time jobs to help support their family. He provided inspiration, kindness and generosity to many. Passionate about basketball, he received all-conference honors and honorable mention all-American his senior year of high school. He went to the University of Utah, initially on a basketball scholarship, then switched to an NROTC scholarship. As a young naval officer he traveled the Pacific on the destroyer USS Hubbard for three years, eventually achieving the rank of Lieutenant Commander. After the Navy, Blaine became a stockbroker for Merrill Lynch in Salt Lake City, and married Joan Moody, with whom he had seven children. He entered a graduate program in applied economics at the University of Pennsylvania where he won the prestigious Ford Foundation Faculty Research Fellowship. He received his Ph.D in 1967, one of only three awarded by the Wharton School that year. His research articles were published by the nation's most prestigious journals and he was hired as an Associate Professorship at Purdue University in 1967. Wanting to return to his roots, Blaine took an appointment at the University of Utah's College of Business where he became a full professor within three years. During this same time, he and his brother Jon, built a packaging business, Huntsman Container Corporation, which they eventually merged into Keyes Fibre and later Arcata Corporation. Blaine was appointed Dean of the Business School at the University of Utah at the age of thirty-nine. He became a director (and later president) of the Western Finance Association, and published in The Journal of Financial and Quantitative Analysis and other academic journals. He created the College of Business's first Board of Advisors, recruiting many business and community leaders including George Romney Gordon B. Hinckley and Howard W. Hunter. In the 80's, Blaine and his business partner became the largest developer in Park City. They built Shadow Ridge, Park Station, The Knoll at Deer Valley and were part of a small financial syndicate that put together Deer Valley Resort complex. They donated the historic Miners Hospital to the city relocating it to the park where it stands today. He was instrumental in negotiating and developing the Town Lift. As an early trustee, Blaine worked with Robert Redford and others to establish the Sundance Film Festival. In 1981 his first marriage ended and in 1985 he married Nancy Lewis. Blaine and Nancy had two children together. After a halfhearted attempt at retirement, Blaine became Chairman and CEO of the region's largest federal savings bank (Prudential Federal Savings-later renamed Olympus Capital). Olympus Capital was later acquired by Washington" Mutual. Blaine served as a director or a trustee on more than a dozen publicly traded corporations, including Dean Witter Reynolds, Z.C.M.I. and Geneva Steel. Throughout his life, Blaine loved fishing and hunting, and continued this tradition with his children. In the mid 70's, Idaho's Teton Valley became his destination of choice where he later purchased 400 acres of ranch, wetlands, and a perennial spring creek. The land enthralled him and he became a champion of wildlife habitat restoration. Blaine, Nancy and their larger family worked with a host of conservation agencies to restore heavily grazed pasture and a degraded stream into a waterfowl and trout paradise. Today, in addition to providing rich habitat for wildlife, this legacy will be a gathering place for his family for generations to come. Blaine is survived by Nancy, his wife of twenty-seven years, and his many children and grandchildren: Alonzo Blaine III (Lon), his wife Julie (Gustin) and their children Zeke (6) and Violet (5); Scott and his children Lily (16), Jade (14) and Jack (8); Heidi, her husband Mark Robinson and their daughter Charlotte (3); Lisa, Brigham Beach, Richard, Stewart and Merodean. Blaine is also survived by brothers Jon M. Huntsman Sr. and R. Clayton Huntsman. An open-house reception to honor his life will be held in the Orangerie at Red Butte Gardens on Wednesday November, 14. Please stop in between 5 and 9. Memorial services will be held at Libby Gardner Hall at the University of Utah on Thursday, Nov. 15 at 2:30 (please arrive early as parking can be difficult, we have 50 spaces reserved at the Newman center). In lieu of flowers, donations can be made to the Huntsman Cancer Institute, the Eccles School of Business or the Teton Valley Land Trust. (

The family of Alonzo Blaine Huntsman Jr. created this Life Tributes page to make it easy to share your memories.