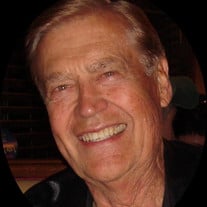 One of the greatest men to have ever graced this earth, has returned home. Aloysius John Walkowski passed away peacefully, at the age of 93, in his sleep, on March 24, 2021. He is now walking through beautiful flowering meadows, hand-in-hand, with his beloved angel-wife, Marian (Theobald). They were married for seventy-one earthly years; and now, forever. While here, they traveled the world and are now, as angels, visiting other worlds. Al was born February 8, 1928, in Decker, Michigan, to humble, Christian parents, Adam, and Adele. He had one brother, Joseph, and one step-sister, Helen. Al was named after Saint Aloysius, who, ironically, considering the recent world-wide pandemic, has been considered a patron saint of plague victims. Al is a WW II veteran. Just shy of his eighteenth birthday, he enlisted in the military and served in the Air Force as a telegraph and radio operator. Because of divine intervention and where Al served in the Air Force, is how he would meet his wife-to-be. They first met at a dance in Kearns, Utah at what was once a temporary army camp set up during WW II, called Camp Kearns. They only knew each other for a month before Al was shipped off to California. But Marian was not going to let her man get away, so she and two girlfriends followed him to California, under the pretense that they went there to work. Thus, commenced a two-year courtship. However, when Al was later transferred to Florida, Marian went home to Utah. Later, he was transferred back to California, where he was supposed to be shipped overseas. Instead he was conveniently transferred to Hill Airforce Base, Ogden, Utah where their romantic relationship became more serious. Al eventually proposed to Marian and they were married on the two-year anniversary since they first met, August 20, 1948. They were later sealed in the LDS Salt Lake City temple, as an eternal companionship. Together Al and Marian (Muffy) had four children, twelve grandchildren and twenty-two great grandchildren. All that knew him, lovingly referred to him as Pops. Al is survived by his four children and their (spouses); Kim & (Julie Ewell) Walkowski, A.J. & (Dale Price) Walkowski, Cary & (Kim Sondrup) Walkowski and Sharon & (Bruce Harris, deceased); twelve grandchildren and (spouses); Nick & (Angela Lee) Walkowski, Amy & (Joe Jacoby), Jason Walkowski, Amber & (Matt Tingey), Adam & (Alli Bodily) Carlson, Tehani & (Jay Wilkinson), Hailey Walkowski, Jaimey & (Tyler Pritt), Jenessa & (Jordan Sheffield), Joshua Walkowski (deceased), Tiffany & (Loren Okuly), Bradley & (Amanda Blodgett ) Shafer, and twenty-two great grandchildren; Nolan, Faye, Bobby, Bentlee, Beau, Andy, Sammy, Sophia, Ella, Wyatt, Elliotte, Darwin, Scarlet, Watson, Vandor, Tristen, Lila, Olivia, Jace, Brandon, Ashley and Benjamin. Al was a devout, spiritual giant, in so many ways. He always had a smile and a cheery word to any and every one. To him, no one was a stranger. He and Marian served a two-year inner-city mission to the poor and elderly of the Salt Lake City Liberty Stake. Pops always had a fondness for Mother Teresa and Jesus was his best friend. Al was a great provider and a hard worker. He worked for the Salt Lake City Fire Department for 30 years, retiring as a captain in 1986. He also had many other supplemental jobs. Yet, he always found time to be a loving father and husband. Al was a sports enthusiast but his favorite passion was baseball. He could tell endless stories of the baseball greats and he even got a chance to try out, as a pitcher, for the Detroit Tigers (unfortunately, his fast ball wasn’t fast enough). Boats, trailers, snowmobiles, a swimming pool, the cabin — Pops and Muffy were always consciously creating quality ways to be a family and keep the family close. And pinning a map of the places they traveling around the world would be quite an undertaking. They made a home, that Al built, in Utah, and that is where they lived until their passing; Marian on August 5, 2017 and Al on March 24, 2021. As a team, Marian and Al had the foresight, ambition, and hard work required to be successful in many ventures. One of those was their beloved Lamb’s Canyon cabin, where friends and family enjoyed innumerable happy gatherings and where numerous wedding and other special events were ceremoniously celebrated. Al was in the care of Sharon, after Marian’s passing. It has been truly a labor of love, even and especially through this trying time that we have all experienced, the Coronavirus pandemic of 2020. Al can best be remembered as a friend to everyone, a hardworking, selfless father and husband, a man of honor and virtue, and an extraordinary example to us all. The viewing and funeral will be held at the Premier Funeral Home, located in Midvale, Utah, 8000 South 67 East, on Tuesday, April 6, 2021. The viewing will be from 10 to 10:45 A.M. and the funeral will start at 11 A.M. Please wear a face mask! The graveside service and interment will be following the funeral, where Al will be buried beside his beloved companion at the Salt Lake City cemetery, 4th East & ‘N’ Street. In lieu of flowers, we are asking you to find someone who needs a lift and give them a donation in Al’s honor. He and Muffy would like that. Al, Thank you for a memorable and honorable life. We love you and miss you but we will see you soon enough. Give our love to Muffy. Happy Trails! Love, your family and friends Friends and family may leave online condolences and memories and even upload photos to the website - www.premierfuneral.com.

One of the greatest men to have ever graced this earth, has returned home. Aloysius John Walkowski passed away peacefully, at the age of 93, in his sleep, on March 24, 2021. He is now walking through beautiful flowering meadows, hand-in-hand,... View Obituary & Service Information

The family of Aloysius John Walkowski created this Life Tributes page to make it easy to share your memories.

One of the greatest men to have ever graced this earth, has returned...