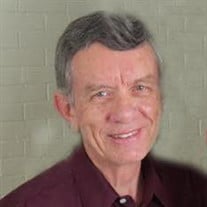 Alvin K. Benson 1944 - 2017 Alvin K. Benson stepped forward in his eternal progression when he entered the spirit world on Christmas Day, December 25, 2017. Al was born on January 25, 1944 to Carl and Josephine Benson. He was reared in Payson, Utah, and participated in sports, including baseball, basketball, and football, at a variety of levels. He graduated from Payson High School in 1962 and attended Brigham Young University, earning a Bachelor of Science degree in physics in 1966. Al married his beloved companion Connie Lynn Perry on June 17, 1966 in the Manti Temple. In 1972, he graduated with a Ph.D. in quantum physics from BYU. He and Connie then moved to New Albany, Indiana, where Al served as a professor of physics and head of the physics department at Indiana University Southeast. He also served as the Bishop of the New Albany Ward. During this period of time, he and Connie became the parents of three beautiful daughters, Alauna Marie, Alisa Michelle, and Alaura Dawn. In 1978, Al made a transition to geophysics, working for Conoco R&D for nine years, serving as a supervisor of geophysical research and as a research associate. He took a one year leave from Conoco to serve as a visiting professor of geophysics at BYU during 1984-85. During that time, he and Bob Stolt wrote a book on the theory and applications of seismic imaging. In 1986, Al became the geophysicist at BYU, where he taught and did research until 2001. Retiring from BYU in 2001, Al helped implement the physics degree program at Utah Valley State College. After a seven-year battle with cancer, Connie departed to paradise on February 27, 2007. Al retired from Utah Valley University in 2013. On March 9, 2013, he married Marilyn Andersen in the Mount Timpanogos Temple. Together, they have 10 children and 30 grandchildren. One of Al’s most important research achievements was the development of a modified self-consistent quantum field theory that has been applied to help explain many observed macroscopic phenomena, such as ferromagnetism and superconductivity, from the microscopic interactions of fundamental particles. He and Brett Mustoe were the first to successfully map near-surface faulting using ground penetrating radar, and he, Melissa Stubben, and Kelly Payne were the first to successfully map broad regions of conductivity, such as those associated with groundwater contamination, using Wadi VLF (very low frequency) methods. Al has published 6 books (2 on seismic migration and 4 about inventors and inventions), over 100 papers in journals and proceedings, over 400 scientific essays for reference books, and over 30 religious papers. He served on the editorial board of the Journal of Applied Geophysics from 2000-2010. Al’s greatest love is for his family. He loved to spend time with them building memories that will last eternally. He served many years in The Church of Jesus Christ of Latter-day Saints as a Bishop, High Priest Group Leader, High Councilman, Young Men’s President, Gospel Doctrine Teacher, ordinance worker in both the Mt. Timpanogas and Provo Temples, and in many other capacities. His family thanks the doctors, nurses, and aides for the good care they provided for him. Al is survived by his wife Marilyn, her children and grandchildren, his daughters: Alauna (Boyd Westover), Lisa (Craig Neilsen), and Laurie (Jem Bjarnson), his twelve grandchildren: Mikayla, Tiana, Marissa, Brannon, Trevon, Declan, and Liam Westover, and Cory, Alivia, and Daxton Neilsen, and Ryker and Boston Bjarnson, his brother Leon and his sister Corine. He was preceded in death by his first wife Connie, his father Carl and mother Josephine, his sister Nola, and his brother Monty. Funeral services will be held at 11:00 a.m. on Saturday, December 30, 2017 at the Lakeridge Fifth Ward, 950 South 50 East, Orem, Utah. There will be a visitation one hour prior to services.

Alvin K. Benson 1944 - 2017 Alvin K. Benson stepped forward in his eternal progression when he entered the spirit world on Christmas Day, December 25, 2017. Al was born on January 25, 1944 to Carl and Josephine Benson. He was reared in Payson,... View Obituary & Service Information

The family of Alvin K Benson created this Life Tributes page to make it easy to share your memories.