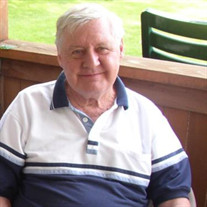 Alvin Eugene (Gene) Whipple passed away peacefully on Tuesday, July 7, 2020, after a valiant struggle with Parkinson’s disease. He was born March 7, 1935 to Eugene Brook (Dean) and Mary Grace Whipple. He was the oldest of six children. He met and married his sweetheart Frankie Nelson on September 25, 1952. He was a Korean War veteran. Together he and Frankie had six children, 26 grandchildren, and 18 great-grandchildren. He was a devoted husband and father who was always happiest with his family around. Gene was a trained electronics technician, and he worked many years for Hercules. He was very creative, constructing a beautiful doll house for his daughter that all the grandchildren loved, as well as a gliding airplane swing that hung suspended from the ceiling in the family room. His artistic skills expanded into graphic arts. He was very talented using watercolors and oil paints. He won many ribbons for his paintings, and his “Farmers Market” painting won best of show in the amateur class at the State Fair. He was invited to display many of his art pieces for an exhibit at the Midvale Library. Gene was an outdoorsman who loved sail-boating and camping. He served as Scoutmaster in his ward for many years, helping his sons as they grew up in the scouting program. He also enjoyed building model airplanes. He and his children spent many happy hours out in the fields flying the planes. Gene is survived by his wife Frankie; children: Terry (Susan), Randy (Karen, deceased), Steven (Kelly), Christopher (Vanh), Lillie (Patrick) Neeley, and David (Jessica); brothers: Harold, Leon, and LeRoy. Preceded in death by his parents, brothers Vernon and LaMar. A family viewing will be held on Tuesday, July 14, 2020 from 10:00-11:00 a.m., immediately followed by a graveside service at 11:00 a.m. Both events will be held at the West Jordan Cemetery, 7925 South 1300 West, northeast end (opposite Gardner Village). We would like to thank the caring staff of Copper Ridge Health Care Center who gave devoted service to Dad in his final year.

Alvin Eugene (Gene) Whipple passed away peacefully on Tuesday, July 7, 2020, after a valiant struggle with Parkinson&#8217;s disease. He was born March 7, 1935 to Eugene Brook (Dean) and Mary Grace Whipple. He was the oldest of six children.... View Obituary & Service Information

The family of Alvin Eugene (Gene) Whipple created this Life Tributes page to make it easy to share your memories.