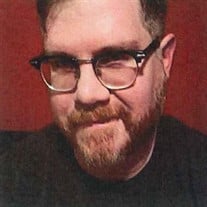 Andrew Main Young, born June 28, 1974, died suddenly of complications from liver and kidney failure on Thursday, January 21, 2021 at IMC Hospital in Murray, Utah. He was the son of Fay Richard and Dorothy Liden Young. Andrew spent his entire life in Utah, attending elementary, junior and high school in Woods Cross. He also attended the University of Utah. He learned to play the alto saxophone, which may have prompted his love of all kinds of music (except rap, he often said). His CD collection numbered in the thousands and you never bet against him in “Name That Tune.” He worked in the music and media industry his entire life, becoming the manager (and training other managers) of one of the largest chain stores in the nation. Some of his favorite shows to share with this girls were Star Trek and Star Wars (hence his fascination with space, stars, nebulas, etc), Lord of the Rings, survival and competition shows, and the Simpsons – they never missed a new episode. A favorite tradition was to go to the movie theater with his girls to see each new Pixar movie for his birthday every single year, his favorite being Wall-E. His favorite author was by far Stephen King – he read every single book he released. Andrew was partial to foreign films, especially films from The Criterion Collections. He was an animal lover and always had some kind of pet living with him, most recently kittens Weslie and Wookie. He also enjoyed nature and traveling around the western United States and had a passion for collecting all kinds of maps. His biggest love of all was for his daughters Ridley and Harper with his former partner Emily Dumas. How he cherished his girls! He was so proud of their accomplishments, was a doting father and most of all loved them with all his heart. He later married the love of his life, Nicole (Nikki) Ann Richards. She became a second mom to his girls and he a second dad to her boys. He was predeceased by his mother. Andrew is survived by his wife, Nikki, daughter Ridley (15) and Harper (13), stepsons Isaak (17) and Alek (14), father, one brother, Benjamin (Heather) and two sisters, Becky Pettit (Mark) and Cindy Jacobson (Johnathon) as well as cousins, nephews and nieces. Condolences may be sent to www.premierfuneral.com. In lieu of flowers, donations may be made to Nikki’s Venmo account @Nikki-Young-81 to help the family get back on their feet.

The family of Andrew Main Young created this Life Tributes page to make it easy to share your memories.