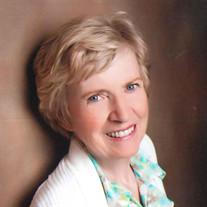 Angelica Rosemarie Molloy, 76, wife, mother, grandmother, aunt and friend to many, passed away peacefully early Sunday morning on April 22, 2018 at her home in Daybreak, South Jordan, Utah. She was born on March 24, 1942 in Kulmsee, Germany (now Chelmza, Poland) to Kurt Karl Remde and Margaret Miller/Müller. She came with her American mother and older sister to the USA at age 6 and remembers passing the Statue of Liberty in New York Harbor. They went to live with her mother’s relatives in Oregon and learned upon arrival of her father’s passing from tuberculosis in Germany. Her mother was remarried to Wilford “Bill” Measom Patterson in 1952 in Kansas City to where they all moved. On December 4, 1954 Angelica was baptized there into The Church of Jesus Christ of Latter-day Saints by her step-father. On February 5, 1957 she was naturalized as a proud citizen of the United States of America. In 1960 she graduated from Shawnee Mission North High School in Overland Park, Kansas. Angelica then attended Brigham Young University and sang with their well-known Program Bureau. Then she lived with her sister in Washington, D.C. and worked for the State Department as a clerk typist in interior designs new consulates. In 1963 she was called to serve a two-year mission for the Church in Austria, where she also relearned her mother language. There she was in a singing group of four Elders and four Sisters “Mormonettes”, who performed for about a year throughout the country on radio, television as well as local venues. Upon returning in 1965 to the Washington, D.C. Ward her future husband saw her lead the music in Mutual, but they met at the Sacred Grove in Palmyra following a testimony meeting after seeing the Hill Cumorah Pageant. Their first date was going to the New York World’s Fair, Jones Beach and all. Second date was to the “Sound of Music” – she was another “Maria”! After attending BYU again she married Gerald “Jerry” Edward Molloy, April 7, 1966, in the Salt Lake Temple and had five open houses/receptions. They then lived in France and Germany for about eleven years, while Jerry was an Air Force Officer and then a teacher/counselor in American high schools. Often they referred to that time as having a “charmed life” - traveling throughout Europe, including East Germany and her birthplace; serving in the Church and her performing. They returned to US in 1978, residing in Canyon Rim and Cottonwood Heights until February 2017. Angelica was known for her many acts of kindness, notes of encouragement and missionary zeal. She was a most devoted mother to all her children and grandchildren – especially a good listener. Angelica loved to entertain and had a beautiful and versatile voice, even yodeled. She played the piano, violin, guitar, and accordion often accompanying herself, particularly with her concertina. Even when her fingers wouldn’t function, she played a harmonica. Angelica served with her husband as a stake missionary among the servicemen in Germany, counselor in Relief Societies, Primary President, Ward Music and Choir Director, etc. However, she suffered nearly forty years with debilitating and crippling effects of rheumatoid arthritis for which she had 28 operations - almost a bionic women. She truly has been a great example! In recent years she tried to continue working on scrapbooks and the family story. Survived by husband and eight children, 5 daughters and 3 sons: Celeste (Blake) Butler, Cory, Heidi, Hiram (Sarah), Sara (Jules) Lambries, Steven (Vanessa), Teresa (Chadwick) Graham and Beth (Cory) Robin; 21 grandchildren: sisters, Heidi Dixon, Emily (Dennis) Taylor, brother, James (Donna) Patterson: many nieces and nephews Preceded in death: fathers, Kurt Remde, Wilford Patterson, mother, Margaret Patterson, also infants, brother, Dietrich, and sister, Ingeborg. Funeral service will be held Friday, April 27, 2018, at the Cottonwood Heights Brighton Stake Center, 2895 East Creek Road, at 11:00 a.m. preceded by a viewing from 9:30-10:45 a.m. Interment will be at the Salt Lake City Cemetery. In lieu of flowers please consider donating to the LDS Donations under Other: Temple Patron Assistance Our family thanks Envision who provided home and hospice care; also many health care professionals over the years.

Angelica Rosemarie Molloy, 76, wife, mother, grandmother, aunt and friend to many, passed away peacefully early Sunday morning on April 22, 2018 at her home in Daybreak, South Jordan, Utah. She was born on March 24, 1942 in Kulmsee, Germany... View Obituary & Service Information

The family of Angelica Rosemarie Molloy created this Life Tributes page to make it easy to share your memories.