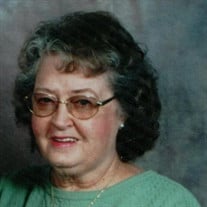 Ann B Cahoon Sticht 1930 – 2017 HEBER CITY, Utah – Our beloved mother, grandmother, great-grandmother and friend, Ann Sticht returned home after completing her lifelong service Friday, December 29, 2017, from her home in Heber City, Utah. She passed away peacefully in her sleep after having visited with many family members over Christmas. She was born to Robert W. and Laura V. (Johnson) Brown April 6, 1930, in Soda Springs, Idaho and was raised by Rais John Reynolds Cahoon, his wife Regina Enora Eskelsen and their seven children after joining their family as a baby. Anna married her high school sweetheart in 1949; they were later sealed in the Idaho Falls LDS Temple. She joined the Cahoon family in Bynum, Montana and a few years later they moved west across the Continental Divide to the small farming town of Charlo. As the youngest in the family, she learned all the chores of farm life and was dearly cared for by her loving older brothers after the early death of her Cahoon parents. After marriage, they settled in the nearby town of St. Ignatius for about five years and had two children. They then moved to Missoula, Montana where the two youngest children were born. She was a loving and dedicated wife and business partner for her husband, handling many of the bookkeeping duties for their trucking company. A devoted member of the Church of Jesus Christ of Latter-day Saints, Ann served her local congregation in many ways. At retirement, she and Maynard served a 2 and ½ mission at the Missoula Bishop’s Storehouse. Later they moved to Heber City, Utah, with their youngest daughter, since the older three children had established their families in northern Utah. Anna had many wonderful attributes. She was loving, funny, spunky, sassy, sweet and always wanted to help others. Many people remarked that she was the most kind and compassionate woman they had ever met. She enjoyed a number of pet cats and dogs over the years. She is survived by four children, Martin (Jeanine) Sticht, Claudine (Kory) Meyerink, Terry Yvonne Hoopes and Annette Sticht; 12 grandchildren; 25 great-grandchildren; and numerous nieces and nephews whom she loved dearly and held a special place in her heart. She was preceded in death by her husband, both parents and all of her siblings, except her birth sister, Olive Jane Adkins of Boise, Idaho. Flowers are welcome, or you may donate to the American Diabetes Association. A viewing will be held from 6 to 8 p.m. Thursday, January 4th, at the Heber LDS Lake Creek Building, 6250 East 12100 South. The funeral will be held in Missoula, Montana, at 12 noon, Saturday, January 6th at the Missoula LDS Church, located at 3050 South Ave. West. She will be interred next to her husband at Missoula City Cemetery, 2000 Cemetery Road.

The family of Anna B Sticht created this Life Tributes page to make it easy to share your memories.