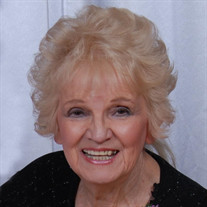 Annette Davis Stoddard Annette Davis Stoddard, 81, of Sandy, Utah (July 30, 1935-February 25, 2017) passed away Saturday in her home with her family surrounding her. She was born in Salt Lake City, UT to David Moroni Davis and Cora Lynn Adamson Davis. She leaves behind her beloved husband of 61 years, Gerald Lee Stoddard, her son Scott K Stoddard of SLC, her daughters Wendy Stoddard Roberts (Kent) of Pocatello, ID, and Susan Stoddard Leavitt (John B) of Aurora, CO her grandchildren Jennifer Roberts Oliphant (Thomas) of TX, Jacob Kent Roberts (Molly) of WI, Joanna Leavitt Rojas (Christian) of CO, John Charles Leavitt of CO, David Kent Roberts of ID, Emma Leavitt Flores (Erik) of VA, Scott Edward Leavitt of CO, Nick Leavitt of CO, Thomas Leavitt of CO, Benjamin Kent Roberts of ID and her great-grandchildren Vera, Trey, Donovan, Jason, and Jordan. Annette grew up on the Avenues in SLC and attended West High School and the University of Utah, she kept in contact with those “Avenue Girls” her whole life. She married Lee on September 3, 1955. As a couple she and Lee lived at 36 different addresses in the first 10 years of marriage. Lee’s job took them to some wonderful places and some of their favorite times were when they lived in Anaheim, CA, going to Disneyland on Friday evenings to dance to the big band music at the Carnation Plaza on Main Street. She stayed connected to her “Anaheimer” friends even after moving to Sandy in the early 90’s. Annette served in many capacities in the LDS church including Primary teacher, YW leader and camp director. She and Lee served a mission for the church on Temple Square where they made many wonderful friends. She most recently served as an ordinance worker for the Jordan River Temple and volunteered at the Draper Temple. She enjoyed life and made everyone around her happy and everything around her as beautiful as she is. Funeral services will be held Thursday, March 2nd, 10:00 a.m. at the Sandy Mount Jordan 5th Ward, 9331 So. 300 E. Sandy, Utah with a viewing for family and friends one hour prior to services. Interment, Downey City Cemetery in Downey,Idaho.

The family of Annette Stoddard created this Life Tributes page to make it easy to share your memories.