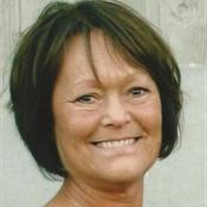 Annette Rawlings Thomas, 64, of Springville, Utah, passed away peacefully in her home from complications of pancreatic cancer on Saturday, 25th of May, 2013. Annette was born in Provo, Utah to George William and Anna Pino Rawlings on January 28, 1949. She was a proud Orem Tiger and graduated in 1967 from Orem High School. She married her high school sweetheart D. Richard Thomas in the Manti temple on July 18, 1969. The two moved to Springville, Utah in 1972 where Annette prepared a welcoming and loving home to raise her 5 children. She had a love of the outdoors and enjoyed spending time with her family while camping at Fish Lake, water skiing at Lake Powell, and hiking the landscapes of Utah. Annette acted as President of the Utah Girls Softball Association and was instrumental in establishing a very efficient Springville girls’ softball program. Her organization skills were as sharp and hard to match as her fast ball. Annette’s passion for service was apparent in the manner she opened her home to friend and neighbor. She exemplified the teachings of her LDS faith with her commitment to comforting those she loved. She had an affinity for shopping which was always directed toward giving to those who had a need. She was a consummate entertainer who never allowed an empty plate or unfilled cup, and did not permit a guest to leave her home with an empty stomach. Annette believed in keeping a house of order and maintained an immaculate home that was tirelessly decorated to match the holiday or season. Annette’s true calling was as a dutiful mother of 5 and grandmother to her adoring 16 grandchildren. She lived for the moments she shared with her babies, whether spoiling them with wants or listening to their voices and footsteps echo throughout her home. We will sorely miss our Grandma. Annette is survived by her husband Dick Thomas, children: Jennifer and Andrew Ellsworth, Sandra and Ryan Brumfield, Ryan and Shelly Thomas, Boone and Annesa Thomas, and Katie and Liufau Alusa. Siblings: Rondo and Barbara, Chuck and Eileen, Rebecca and Scott, Eddie and Natalie, and Jana and Scott. Grandchildren: McKenzie, Alexis, Savanna, Maddie, Tyler, Tanner, Thomas, Kohler, Emma, Clay, Kael, Krew, Chelsey, Colby, Connor and CeeCee. She was preceded in death by her parent, loving in-laws, brother Rex Rawlings and brother-in-law Dan Thomas. Visitation and viewing will be on Wednesday, May 29 from 6-8:00 pm and funeral services will be held on Thursday, May 30 at 11:00 at the Hobble Creek 6th Ward chapel located in Springville at 1700 E. 950 S. Graveside and burial services will be at Evergreen cemetery in Springville. The Thomas family would like to extend a special recognition and thank you to friend, neighbor and loving nurse Nancy Trapnell for the compassionate and professional care rendered to our beloved mother.

Annette Rawlings Thomas, 64, of Springville, Utah, passed away peacefully in her home from complications of pancreatic cancer on Saturday, 25th of May, 2013. Annette was born in Provo, Utah to George William and Anna Pino Rawlings on January... View Obituary & Service Information

The family of Annette Rawlings Thomas created this Life Tributes page to make it easy to share your memories.