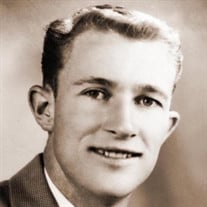 Obituary for Anthon Hugh Lewis Anthon Hugh Lewis 1933 - 2021 Anthon Hugh Lewis, 88 - husband, father, grandfather, teacher, friend - passed away on Thursday, December 16, 2021 after a valiant fight with Parkinson’s disease and pneumonia. He was a resident of Hacienda Heights, California. Anthon was born on February 28, 1933 in Bluewater, New Mexico to Samuel Edward Lewis, Jr and Sarah Matilda Cluff. He was the seventh of eight children. He grew up in Farmington, New Mexico and graduated from Farmington High School. He joined the National Guard while in high school and attended basic military training at Ft. Bliss, Texas where he finished his high school diploma. Originally assigned to serve in Korea, he was reassigned to the US Occupational Forces in Post-WWII Germany from April 1951 until January 1953. A devout member of The Church of Jesus Christ of Latter-day Saints for all his life, he served as a missionary in the Norwegian Mission from October 1953 until June 1956. He then completed his undergraduate education at Brigham Young University, followed by 4 years of studying art in Spain. He later earned his Masters Degree in Education at the University of New Mexico. Having spent over 8 years living in Europe, Anthon loved to travel. During a road trip solo though Central America, he met the love of his life, Marielena Castillo-Ramirez in San José, Costa Rica. They were married and sealed for time and all eternity in the Mesa Arizona Temple on November 21, 1967. As a newlywed husband, he quickly assumed the role of father and legally adopted his wife’s 3 children. Together they had a total of 8 children who were all sealed together as a family on May 30, 1981 in the Provo Utah Temple. He raised his family in Farmington, New Mexico and worked hard through the years to provide for their large family as an educator of Art and English. He loved the Navajo people to whom he taught on the reservation in Montezuma Creek, Utah; Shiprock, New Mexico; and the Crow Indian people at the Crow Agency in Montana. He later relocated his family to Glendale, California where he taught with the Los Angeles Unified School District for 17 years; elementary school by day and adult ESL classes in the evenings. During his retirement, Anthon and Marielena spent 9 years traveling between their home in Hacienda Heights, California and their retirement home in Naranjo, Costa Rica. They kept busy in Costa Rica serving in their local church branch callings and activities as well as gardening and maintaining their property. Friends and family in Costa Rica affectionately referred to him as “Don Anton”. He will be remembered for his love of art and travel which he often shared on social media; for his endless projects - whether completed or not - from his attempts at making pottery and adobe blocks, gardening, home remodeling, etc. Most importantly, he will be remembered for his love of the gospel of Jesus Christ, for the stalwart example of faith he set for all who knew him. He served dutifully in several church callings and loved doing genealogical research and temple work. Although he was a quiet and reserved man, he touched many through his actions, his testimony, and was loved by many. In his later years, Parkinson’s Disease robbed him of much of his strength, yet nothing could stop him from getting out and doing any work whether physical or spiritual that he deemed necessary to do. His memory will be cherished and kept alive by his eternal companion of 54 years, Marielena, his children Carlos (Guillermina) Lewis; Magali (Jeff) Luckau; Frank Lewis; Aaron Lewis; Daphne (Shane) Cannon; Tatiana (Brent) Vincent; Maurice Lewis; Sergio (Melissa) Lewis; his 20 grand children, 15 great grandchildren, as well as his brother, Sylvan Lewis and numerous nieces and nephews. Preceded in death by his parents and siblings: Rhoda Behunin, Albert Lewis, Wallace Lewis, Sarah Hailestock, Lynn Lewis and Vilate Hallett. He will be deeply missed by his dear friends and family across the United States and Costa Rica. A viewing will be held on Friday, December 31, 2021 from 10:00 am in Lehi, UT at The Church of Jesus Christ of Latter-day Saints at 901 S 2300 W. Service will be held following the viewing at 11:00 am. Internment will be at the Lehi Cemetery. 1000-1096 N 400 E St. Premier Funeral Services, Midvale, Utah

The family of Anthon Hugh Lewis created this Life Tributes page to make it easy to share your memories.