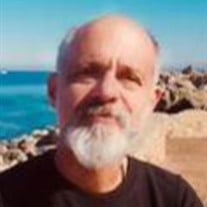 Anthony Todd Price February 10, 1966 – January 17, 2022 Anthony Todd Price – brother, son, father, husband, grandfather, NASCAR fan, storyteller – passed away in the early hours of January 17, 2022. Todd was born on February 10, 1966 to Cynthia Gandy and Anthony “Tony” Price. He was raised and lived most of his life in Davis County, Utah, graduating from Davis High School in 1984. Todd worked many jobs over the course of his lifetime – manual labor, sales clerk, manufacturing and more, and spent some time pursuing higher education at Utah Tech University, formally known as Dixie State. He married Merlene Sigler (later divorced) and they together became the proud parents of Courtney Price (Joshua Norager) and Collin Roy Price who preceded him in his latest journey. We can only imagine their introduction in the hereafter – God speed Dad and son, enjoy the racing, you’ve a lot to catch up on, and some great hugs to give. Prior to Collin’s passing, Todd fell in love with Le Ann Renae Mitchell. They were happily married in Layton, Utah on October 20, 2017. Todd’s last years were difficult as he faced a myriad of health issues. Nevertheless, Le Ann sacrificed selflessly to act as his caregiver and made certain he was cared for, fed and nurtured, and most importantly knew that he was loved and cherished. Todd loved people – speaking to them, engaging in their stories, sharing connections, quibs, one-liners and his big heart. Moreover, should he convey upon you a nickname – it held for life, as he was the “King of the Nicknames,” (although some, perhaps many, . . . may not have been appropriate for all listeners . . . ). He loved fast cars, Harley Davidson motorcycles, the lyrics of Johnny Cash, and his wife and children. Especially dear to his heart were his grandchildren, twins Elias James Norager and Elijah Collin Norager, whom he hoped to see grow up, but must now share his stories, opinions and wisdom from the other side. Todd was preceded in death by his grandparents, Roy and Kelly Price, Kleinman and Agnes Gandy, and his son Collin. He is survived by his wife Le Ann Renae Price, mother Cynthia Gandy, father Tony “Pops” Price, stepmother, Joyce Price, sister Amy Price (Patrick Leary), daughter Courtney Price (Josh Norager), aunts and uncles, cousins, nieces and nephews, step-siblings and most preciously his twin grandchildren, Elijah and Elias. A viewing will be held on Friday January 21st from 6:00 PM through 8:30 PM @ the Layton Christian Life Center, 2352 East Highway 193, Layton, Utah, 84040, (801) 771-5433, and services held at the same location Saturday morning January 22nd, 2022 at 10:00 AM. Remembrances, condolences, pictures and more can be shared at www.premierfuneral.com. While we grieve the loss of Todd in our life, we know that the trials he faced are over. Todd, while slight in stature, punched high above his weight in influencing and touching others – such is his legacy. “Drive Fast – Take Chances”

The family of Anthony Todd Price created this Life Tributes page to make it easy to share your memories.