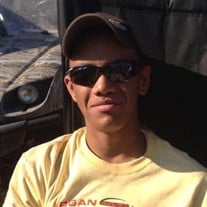 Anthony David Starks, 27, of Herriman, Utah passed away Sunday, July 5, 2020 after a long battle with Alports Syndrome and CHF. Anthony fought a long courageous battle, but sadly his body was just done fighting. Anthony was born on February 19, 1993 in Salt lake City, Utah to Terry and Angela Starks. Anthony attended Herriman High School. He is survived by his parents, Terry and Angela Starks; his brothers, Matthew (Carly), and Ty; his sister, Kylee; nieces and nephews; grandparents on both sides; aunts, uncles and many cousins, as well as many friends who love him. Anthony came from a very strong family and a family that was just not family but best friends. Even though Anthony had this disease and disability he never let it control his life. He tried to live life to the fullest. Sometimes that was hard because of his disability, but he never let it bring him down. Anthony was a very happy kid growing up and grew up to be a happy young man, who, for the most part, had a smile on his face. If you asked him what was wrong he would say, “Oh, nothing – I’m just tired.” He didn’t want to tell people his problems. He wanted to be treated as normal as possible. We spent just about every weekend taking Anthony and the rest of the kids somewhere, whether that be camping, hunting fishing, or 4-wheeling. We just spent a lot of time just being together as family. Those are the best memories that we will have forever. When he grew up and became an adult he was still best friends with all of us. That’s all he wanted was for all of us to be together. Even when he chose to go on hospice, all he wanted was for his family to be around him. He loved doing Sunday dinners every week. That was a great tradition and still is – just a little harder to get together. He did say he wanted all of us, his parents and siblings to start doing it again for him. Anthony loved to go on long car/truck rides and listen to the music as loud as it would go. He also liked hanging out with his friends. He had a few friend that he considered brothers: Peter Barlow, Doc Merchant, Joe Barlow and Taylor Barlow. Anthony always lived life to the fullest – at least the best that he was able to. When he was younger he liked to ride motorcycles – he had no fear. There really are not enough words to describe his life. He is an absolutely amazing awesome son who will always be in our hearts. We are so proud of him. He is the best brother and would do anything for any one of his siblings if he was able to. He loved them all fiercely and was protective of them. He was also a little jokester. If he could get you with a joke he would take his shot and think it was the funniest thing. But beware – most jokes were not appropriate (Laughs). He was the best uncle to his nieces and nephews and also Kylee’s dog, Bandit. There will never be another person like Anthony. He was one-of-a-kind for sure. No one could ever take his place. If they tried, they’d have big shoes to fill. Anthony will be forever watching over us. He wanted all his nieces and nephews to do great things, and to make him proud and to live life for him now. He will truly be missed by so many. We love you Anthony, Marve, Marvin and uncle Marve and Lou Lou!

The family of Anthony David Starks created this Life Tributes page to make it easy to share your memories.