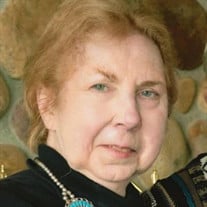 Antoinette (Toni) Bizyak Breiter passed away in her sleep of natural causes in Salt Lake City, UT on July 30, 2021. She was 82 years old. Toni was born on September 16, 1938 in Pittsburgh, PA to Rudolph and Helen (Ciesinski) Bizyak. She had a normal childhood in Pittsburgh until fate intervened on December 31, 1955, when she went on a blind date with Jerome (Jerry) Breiter. The two never looked back and were married on August 16, 1958. While living in Indiana, Delaware, and finally Fairfax, VA, Toni stayed home raising their three children, Kirsten, Karl, and Karin. In 1972, Toni began attending George Washington University. In 1976, she finally achieved her dream of a college degree, earning a BA in Journalism with a minor in Latin American Studies. For many years she worked at the National Council of La Raza and the National Puerto Rican Coalition as a writer and editor; she was particularly proud of the work she did with these two organizations. She was also very proud of the times she had a Press Pass to White House news briefings. She eventually began her own company, Mariposa Media Services. Upon her retirement, she and Jerry moved to Park City, UT. In addition to raising three children and having a successful career, Toni was passionate about many causes and hobbies. She loved everything about Central and South America, especially Mexico: the people, the culture, artwork, and history. She often joked that she was a reincarnated Aztec princess. Toni was also a strong advocate of women’s rights and civil rights, and participated in marches for both in Washington, D.C. Toni had a multitude of hobbies. She was a talented seamstress and made many of her own and her children’s clothes. She was an accomplished, self-taught gourmet cook, and dinner parties at the Breiter household were always the talk of the neighborhood. Toni was also an amazing photographer who documented not just her family’s life but also the many countries she and Jerry visited. She was an avid reader, a love she passed down to her three children. But perhaps her greatest passion was music. Toni loved all music and you could always hear her singing anything from choral music to rock and roll. One of her greatest joys was singing with the Fairfax Choral Society for nearly three decades. Even after moving to Utah, she would often return to Fairfax once or twice a year to participate in one of their concerts. Toni and Jerry love to travel and went to many places around the world including Mexico, Colombia and the Galapagos Islands, Peru, China, and Russia. They even visited their ancestral homelands of Poland (Toni) and Lithuania (Jerry). But above all, Toni loved her family. She was as proud of them and their accomplishments as they were of her and her accomplishments. Toni was preceded in death and has been reunited with her husband Jerry, son Karl and daughter Karin. She is survived by her daughter Kirsten (Steven) Johnson, daughter-in-law Cathy Breiter, grandchildren Danielle and Megan Breiter, brother Rudolph (Hatsuko) Bizyak, and a multitude of family and friends. If you would like to honor Toni’s memory, please consider a donation to the Fairfax Choral Society. A memorial service to honor Toni, along with husband Jerry and son Karl, is being planned to be held in Fairfax, VA in the Autumn.

Antoinette (Toni) Bizyak Breiter passed away in her sleep of natural causes in Salt Lake City, UT on July 30, 2021. She was 82 years old. Toni was born on September 16, 1938 in Pittsburgh, PA to Rudolph and Helen (Ciesinski) Bizyak. She had... View Obituary & Service Information

The family of Antoinette "Toni" Bizyak Breiter created this Life Tributes page to make it easy to share your memories.

Antoinette (Toni) Bizyak Breiter passed away in her sleep of...