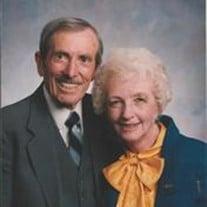 Arlin Roberts Potter passed away early on January 3rd, 2013. He was 96 years old. Born to Alma Lewis and Genevieve Rust Potter September 2, 1916, he married Dorothy Bennion on June 18th, 1946. Arlin is well-known among community, friends, and family as being an innovative thinker, inventor, and one who was always looking for ways to spread the Gospel, educate on pressing issues, and to help people's lives. Many of his many faith-promoting stories are available in his biography, "Bits of Clay", available on request to [email protected] Over the years, he worked as a rancher, logger, and pioneer; then as an insurance salesman and entrepreneur. In his youth, he served an LDS mission to in the US Southwest (California, Nevada, Arizona). He served under General Patton in North Africa in World War II, and participated in the invasion of Sicily. Mostly self-schooled, he prided himself in saying, "I attended three universities; didn't graduate from any." He and Dorothy enjoyed being active in politics together, hiking, and camping. He raised his children to love the Lord, and to look at life in new ways. As an insurance salesman, he introduced new policies that changed the entire industry. He delighted in building his 'dream home' in California from scratch, and late in life, delighted in being surrounded by "all the precious little children." Arlin was truly 'the last cowboy', and will be sorely missed. He is pre-deceased by daughters Karen (Tom) Schumann, and Jane (Peter, div.) Jenkins. He is survived by daughters Gwenna (Clyde, div.) Gowers aka Gwyneth McNeil, Jolene (David) Clawson, son Kent B. (Nancy) Potter, 21 grandchildren, and 32 great grand children. Viewing will be 6 PM - 8 PM on Friday 11 January. Final viewing 10 AM Saturday 12 January 2013, with Funeral Services 11 AM, at the Pleasant View 1st Ward Chapel (650 E Stadium Ave, Provo, UT 84604). He will be laid to rest with military honors, including an honor guard and military salute (three volleys of rifle fire) to honor his wartime service in defense of our nation. The family invites all of Arlin's (and Dorothy's) friends to come and help celebrate Arlin and his righteous life well lived.

The family of Arlin Roberts Potter created this Life Tributes page to make it easy to share your memories.