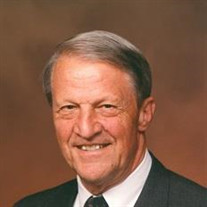 Arlo Gale Hyde, age 91, of Farmington, Utah passed away peacefully on September 16, 2016 at his home at Farmington, Utah. He was born into a loving, close knit family October 25, 1924 at Rupert, Idaho to Rosel Hyde and Caroline Amelia Allen. He was the youngest of seven children. He attended Pioneer School in the Minidoka District. He loved the years he attended Pioneer School and fondly talked of his experiences there, especially playing the part of a Christmas package in the school Christmas play. He began taking trumpet lessons at Pioneer School. He graduated from Rupert High School where he was involved in FFA and played the trumpet in the pep band. While in high school he became a member of a dance orchestra, which played though out the region. His pleasant childhood memories were of the farm with his family, swimming in the canal, 4th of July at Rupert Square, Christmas, and his favorite-family fishing and camping trips. He grew up on a dairy farm where he helped, when he was older, bottle and deliver Hyde’s Jersey Dairy milk. It was there that he saw his father’s example of hard work and doing a good job was impressed upon him that he carried throughout his life. He was the third son in his family to be drafted into WW II serving in the army as a tank trainer and operator. He most likely received that post because of his experience with farm equipment. After an honorable discharge from the army he attended Utah State University. There he was a member of Sigma Phi Epsilon fraternity. He graduated with a bachelor’s degree in soil science. He remained a true “Aggie” and enjoyed returning to visit the campus in Logan. After graduation he began working for the U.S. Bureau of Reclamation. As an agronomist for the Bureau, he worked in Utah, North Dakota, Brazil, and Nevada. He enjoyed his work with the Bureau and retired after working there 30 years. He met and married his first wife Violet Lancaster at Osmond, Wyoming in 1956, later solemnized in the Idaho Falls Temple. They had a daughter, Patricia. Violet passed away in 1960. Arlo married Judith Loveless, at Salt Lake City, Utah in 1968 in the Salt Lake Temple. They had a son, Paul Arlo. Arlo was a Master Gardener. He enjoyed the outdoors and spent much time there whether it was fishing, camping, gardening or building projects in the yard. He enjoyed travelling to six continents. He was able to swim in the Dead Sea and walk on the Great Wall. His many church callings included serving in the Bountiful and Ogden Temples. He is survived by his wife, Judith, his children Patricia (Ralph Judd) and Paul (Evelina Savinskaya) Hyde. He was preceded in death by his wife, Violet, his parents Rosel Hyde and Caroline Amelia Allen, his brothers Allen (Doris), Clifford (Ada), and Rosel, and sisters Erma (Ivan Johnson), Thelma (Veldon Jones), and Wanda. He is now celebrating a reunion with them. Arlo will be sincerely missed. Funeral services will be held at the Farmington Ninth Ward, 695 South 200 East Farmington, Utah on Monday, September 19, 2016 at 11 a.m. with viewing prior to services from 9:30-10:45 a.m. Interment and military honors, Rupert City Cemetery, Rupert, Idaho on September 20, 2016

Arlo Gale Hyde, age 91, of Farmington, Utah passed away peacefully on September 16, 2016 at his home at Farmington, Utah. He was born into a loving, close knit family October 25, 1924 at Rupert, Idaho to Rosel Hyde and Caroline Amelia Allen.... View Obituary & Service Information

The family of Arlo Gale Hyde created this Life Tributes page to make it easy to share your memories.