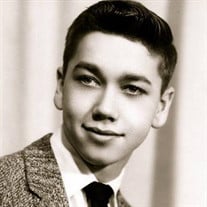 Arnold Leroy Howse 1941-2016 Arnold Leroy Howse, loving son, brother, husband, father, grandfather and great grandfather, completed his mortal probation Saturday, June 18, 2016 at his home in Orem, Utah surrounded by half of his twelve children. He won the battle against a fast-growing glioblastoma, surpassing the doctor's expectations by five months. Arnold was born Friday, December 5, 1941 at his parent's house on Third street in Harbor Springs, Michigan, the youngest of three children and only son of Clifford Leroy Howse and Gertrude Caroline Catob. As a youth, Dad quickly showed his musical aptitude, taking up the trumpet at the suggestion of the band director, Joseph Jezisek. He played in a dance band and marched in parades as a band member for most of his life. In high school he also played football and was active in other school activities. It was at High School in band class that he met his future wife, Joanne Marie Heinz. They were married in the Presbyterian Church at Harbor Springs on Friday, September 18, 1959. Together they shared their love of music with their children and community. Arnold became a member of the Church of Jesus Christ of Latter-day Saints in 1963 shortly before his graduation from college. He became a biology teacher at Carrollton High School in Saginaw and later taught at East Jordan High School. He and mom nurtured the gospel in Northern Michigan, where he eventually became Branch President and then the first Bishop of the Petoskey ward. During the summer, Arnold worked as a fudge maker at Crump's Candies in Harbor Springs. In 1974 Arnold became the owner of the candy store and changed the name to Howse's Candy Haus. He retired from teaching and introduced Northern Michigan style fudge around the country, eventually opening shops in Provo, Utah, DelRay Beach, Florida and finally in Park City, Utah. His son Christopher, now runs the candy store in Harbor. Joanne passed away in 2006. Arnold married Janis Heiner on February 6, 2009 in Orem, Utah. Together they adopted Janis' grandson, Taygan. Arnold is survived by his wife and his children, Bethany Anne Downey (Brent), Darby Lee Robison (Stephen), Annette Marie, Clifford Leroy (Martha Hanneman), Carey Lizabeth Anderson (Mark), Christopher Heinz (Teresa Maxwell), Arnold Price (Carrie Bennett), Jody Jeffrey (Adria Hunt), Daniel Leslie (Mandy Quintero), David Andrus (Karen Peterson), Andrew Michael (Alicia Hansen), Timothy Donald (Luz Longoria), Taygan, his 64 grandchildren, and 25 great-grandchildren. Arnold is also survived by his sisters, Joanne Swiss (Gerry) and Karlene Marsh (Dennis). He was preceded in death by his parents, his wife Joanne, and a granddaughter Christina Shell Howse. Funeral services will be held at 11 am. Wednesday, June 22, 2016 in the LDS chapel, 114 S 400 W in Orem. A viewing will precede the services from 10 to 10:45 am. Interment will be in the Orem City Cemetery.

The family of Arnold Leroy Howse created this Life Tributes page to make it easy to share your memories.