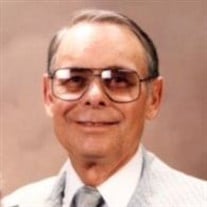 Arnold Lamont Lemmon “Mont” 1928-2017 Our beloved husband, father, grandfather, brother, and friend returned home to his Heavenly Father November 15, 2017. He passed away at the age of 89 due to natural causes. He was born March 25, 1928, in Cedar City, Utah, to Harry and Inez Chatterley Lemmon. After his father died in 1933, he and his mother moved to Los Angeles, California, where his mother worked as a maid and he sold newspapers on the city streets barefoot – “times were hard.” His mother married LeRoy Elmer Davis (Roy) in 1942 – Roy soon became Mont’s “Dad” in every sense of the word. Mont joined the Navy at the age of 17, serving his county in both World War II and the Korean War. After World War II, he met the love of his life, Erma Mae Mitchell. He always said he “swept her off her feet” when, dressed in his Navy uniform, he took her to their first dance. They were married May 22, 1948 in Cedar City. Their marriage was solemnized in the St. George Temple on May 21, 1955. God, family, friends, and country were Dad’s lifelong passions. He leaves a legacy of being steadfast and immoveable as a faithful husband, father, member of the Church of Jesus Christ of Latter-day Saints, and patriot. He never lost his infectious sense of humor. That sparkle in his eyes and the subtle grin – you knew Dad was on a roll. His countless expressions of gratitude, throughout his life, were ever-present until his last breath. Faith, hope, and charity were his lighthouses throughout life’s stormy seas. Dad’s work ethic has been an ensign emulated by three generations. He worked 32 years for Columbia Iron Mine / United States Steel’s Cedar City and Lander, Wyoming operations, 10 years for Thiokol Chemical Corporation’s Solid Rocket Motors Division, and 3 years for Utah State University’s heating plant operation. Interspersed with fulltime employment were always a variety of part-time jobs. Mont was preceded in death by his eternal sweetheart Erma Mae, parents Harry and Inez, “Dad” Roy Davis, and older brothers Harry Jr. and Orwin Lemmon. He is survived by his children: Kathy (Steve) Edwards, Marvin (Lynn) Lemmon, and Arnold (Ro Ann) Lemmon; brother, LeRoy Shaffer (Kay) Davis; 11 grandchildren and 16 great-grandchildren . . . . ”Families are forever.” Funeral services will be held at 2:00 pm, Saturday, November 25, 2017, at the chapel at 1650 West Center Street, Cedar City, Utah. Friends may call at the church Saturday from 12:30 to 1:30 p.m. prior to services. Interment will be in the Cedar City Cemetery.

The family of Arnold "Mont" Lamont Lemmon created this Life Tributes page to make it easy to share your memories.