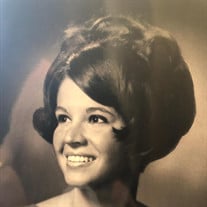 Arta Lorraine Tucker Gunn Lorraine Gunn passed away in Payson, Utah on January 31, 2021. She was born June 3, 1946 in Calgary, Alberta Canada to Kenneth Ross and Leatrice Scovile Tucker. Her earliest years were spent in Salt Lake City, while Ross attended medical school at the University of Utah. She grew up in Riverside, California and during high school moved with her family to Bountiful, Utah. She graduated from Bountiful High in 1964. During high school and early college years, she was selected “Miss Bountiful”, and “Miss Davis County” in the Miss America Scholarship Pageant. In August 1968 she married David F. Gunn in the Salt Lake City Temple of the Church of Jesus Christ of Latter Day Saints. During Dave’s Army deployment to Viet Nam, she completed her Bachelor of Arts degree at the University of Utah and taught English at Clearfield High School. Lorraine and Dave had four children; Cassie, Alex, Tony and Nathan. They had four granddaughters; Attison, Roxey (Red), Thia, and Cleo. They resided in Provo, Utah. Lorraine worked in the offices of the Provo School District and Sunset View Elementary School. Later, she had a wonderful career serving in the International Office at Utah Valley University, first as Office Manager and later as Student Advisor. She retired in 2017 after close to two decades at UVU. Lorraine was active in the Church of Jesus Christ of Latter-Day-Saints, and served in diverse teaching, music and leadership positions, often serving in primary because of her kind disposition with children. She is survived by her Husband, children, daughter-in-law Lesley, grandchildren, and brothers Owen (Miriam) and Stephen and Sisters Sharon Tucker and Lisa Rawley. She was predeceased by her parents, infant son Nathan and brother, Ken. Lorraine and Dave were very pleased that their children earned seven collegiate degrees from Weber State, BYU, The University of Arizona, Northern Illinois University and Florida State. Lorraine loved literature, film, and music. She had a quick wit and keen intellect, able to decipher a myriad of meanings from the narratives she interacted with. She was always most happy when she could give to others and provide service for those in need. Her warmth and generous spirit will be missed by all who knew her. Due to the coronavirus, a memorial open house will be scheduled later.

The family of Arta Lorraine Tucker Gunn created this Life Tributes page to make it easy to share your memories.

Lorraine Gunn passed away in Payson,...