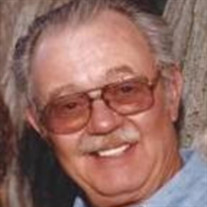 Arthur Boyd Coffin 1935 - 2021 Arthur Boyd Coffin was reunited with the love of his life Lynne on October 16, 2021. He was born September 13, 1935 to Jack Coffin and Trudie Beckstead, who have both preceded him in death. He is survived by his sister Joy Nichols. Arthur and Lynne Walker Coffin were married on June 15, 1953, and were later sealed in the LDS Temple on April 28, 1966. Art worked at the University of Utah doing gardening and other jobs. He then drove a bus for Salt Lake Transit Authority. After attending Utah Trade Tech he received his degree in drafting and worked for UDot as a draftsman, where he was part of several transit projects including the I-15 corridor planning project. His favorite assignment was regional manager of the “Ladybird” Johnson's Highway Beautification program in 1965. He took pride in helping make America’s highways clean and beautiful. He also loved to volunteer with the Utah Avalanche Center exploding snow off the mountains. Art and Lynne enjoyed camping and spending every summer at Bear Lake with their grandchildren, swimming, boating, fishing and basking in the sun on the beach. He loved all things Ford and racing. He rebuilt a 1967 Ford Fairlane, and he and Lynne would cruise around Salt Lake City, stopping for their daily coffee at Bill and Nada’s cafe. He expressed his love of racing as the head flagman at Bonneville Raceway while his sons, Ken and Scott, raced stock cars. His kids joined the ranks and the track was known as the “Coffin Corners”. Even his grandkids got in on the racing fun helping flag at many races. When they retired he and Lynne traveled in their RV with their beloved dachshunds “Chasing Racing” and hunting quilt shops. Art loved parking infield at many Nascar races across the country, and he loved finding all the quilt shops for his darling bride. Art and Lynne loved their family greatly. Their children, Kenneth Boyd married to Debbie Collins Coffin and Arthur Scott married to Diane Stephens Coffin, were the lights of their lives. Their children gave them twelve grandchildren and six great grandchildren who filled their world with love and laughter. Graveside services will be held 12:00 Noon, Thursday, October 21, 2021 at the Salt Lake City Cemetery, 200 North N Street. In lieu of flowers, plant a tree or go fishing

Arthur Boyd Coffin 1935 - 2021 Arthur Boyd Coffin was reunited with the love of his life Lynne on October 16, 2021. He was born September 13, 1935 to Jack Coffin and Trudie Beckstead, who have both preceded him in death. He is survived by... View Obituary & Service Information

The family of Arthur Boyd Coffin created this Life Tributes page to make it easy to share your memories.