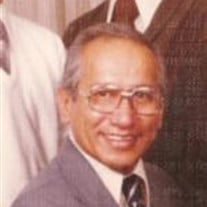 Arturo Rivera Martinez, Loving and honored Husband, Father of 7, Uncle, Grandfather of 20 and Great Grandfather of 6. We will miss him greatly but are happy to know that he is back with his sons, mother and father and many of his friends and family. Arturo, 81 died peacefully surrounded by his family on December 10, 2010. Parents, Castulo DelGado and Domitila Rivera Martinez, Born In Salt Lake City, UT July 28, 1929. Passed away on December 10, 2010. Married in the Salt Lake Temple on August 13, 1952 to Andrea Ramirez Martinez, Children Miguel (deceased), Samuel (wife Tonia), Dulce Gilmore (Husband Howard), Celeste, Raymundo (wife Kristin), Ronaldo (deceased ) ( wife Elsy) and Estrellita Cook (Husband Clary). Art Attended Murray High School, University of Utah, receiving a B.S. In Geography. Art worked for the Bureau of Land Management for 37 years and Retired as the Chief of Cartographic Services for the State of Utah. Many remember him best for his beautiful Operatic Tenor Voice. He attended the National Conservatory of Fine Arts in Mexico City for two years in 1951-1952. He received a scholarship through a famous Tenor, Antonio Senetta to study in the Conservatory Santa Cecelia in Rome, Italy. The Korean War interfered and he spent two years in the Army, receiving the Rank of CPL. Art has appeared in several Lead Roles in the University of Utah Opera Company. Art served in numerous positions in the LDS church, including having been a member of the Mormon Tabernacle Choir. He served an LDS Mission in Mexico. Art served as a counselor in the Bishopric of the Cumorah Ward in Midvale. In 1967, Arturo was called to preside over and open the Mexico North Central LDS mission and afterwards served as the Bishop of the the Cumorah Ward and Later was called as Regional Representative over the Mexico North Central Region for the LDS Church. We look forward to being with him again. In remembrance of him we invite friend and family to his funeral which will be held at 1p.m., Saturday December 18, 2010at the Canyon Rim 2nd ward 3000 South Grace St.

Arturo Rivera Martinez, Loving and honored Husband, Father of 7, Uncle, Grandfather of 20 and Great Grandfather of 6. We will miss him greatly but are happy to know that he is back with his sons, mother and father and many of his friends... View Obituary & Service Information

The family of Arturo Rivera Martinez created this Life Tributes page to make it easy to share your memories.