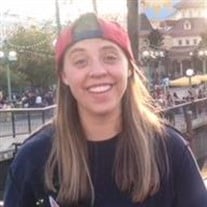 Ashley Rose Poulos 1990 - 2017 Ashley Rose Poulos returned to her Heavenly Father on July 21, 2017. She was born on July 19, 1990 in Provo, Utah to Mark C. Poulos and Laurel McKinnon Poulos. Ashley graduated from Orem High School, she was on the softball team, and she graduated from the Orem LDS seminary. She graduated from UVU with a degree in English. She was a gifted writer, and she loved to read. She loved watching and playing sports. She was a big fan of BYU football. She has worked as a physical therapist aid, a teacher’s aide, and has spent the past year working at doTERRA. She was registered to attend the fall Semester at UVU to continue her education as a social worker, to help those in need. Ashley was a big advocate for social issues. She had a passion and compassion for people who don’t usually have a voice and was a friend to all. Over the past several years she has suffered with the disease of addiction. During that time she influenced and was influenced by many people who affected her life for good. She loved to serve her family and friends and was a constant source of light and joy to everyone around her. Her quick wit and fabulous heart will be missed. Ashley is loved dearly by her family and many friends. She is survived by her parents Laurel and Mark Poulos, and her sister’s Makena (Nigel) Goodwin and their infant son Ira, Courtney, her brother’s, Brandon and Tyler, and grandparents Gail and Chris Poulos and Linda and Gary McKinnon. Ashley was fortunate to have many cousins, aunts, uncles, and friends who loved her. Funeral Services will be held 11:00 am, Wednesday, July 26, 2017 at the Orchard LDS Stake Center, 810 East 600 North, Orem, Utah. A viewing will be held Tuesday, July 25, 2017 from 6:00 until 8:00 pm . There will be a viewing Wednesday morning prior to services from 9:30 am until 10:30 am.

The family of Ashley Rose Poulos created this Life Tributes page to make it easy to share your memories.