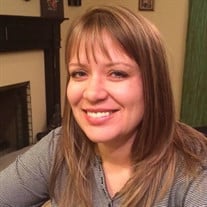 Ashley June Woolstenhulme, 36, former resident of Utah County, died on Saturday July 6th in Florida. Ashley was born on December 2, 1982 in Provo Utah to Debra June Harmon and Valjo Woolstenhulme. Ashley grew up in Pleasant Grove Utah. At the time of her death, Ashley lived in Tallahassee, Florida. Ashley was the kind of kid that could kick your ass while holding a parasol and rocking red lip gloss. She was equal parts girlie-girl and tom-boy. She loved horses, camping, hunting and working on old cars with her Dad Valjo. She was bossy- the kind of bossy that looked out for her loved ones and would give you the shirt off her back and tell you to put it on. She had the face of a living doll with a perfect tan. Cousins remember creative play dates in the yard that usually involved “riding horses” or doing something that might get them in trouble. She was country- big belt buckle, wranglers, red lipstick and sass. She graduated from Lone Peak High School in May 2000 at the age of 17. She joined the Marine Corps shortly after and finished boot camp in August 2000 in Parris Island, SC. She studied Naval Aviation Technical Training Command for Avionics. Her career duty stations were Parris Island, SC: Camp Geiger, NC; NATTC Pensacola, FL. She received the rank of E-3 First Lance Corporal and was honorably discharged in 2001. She loved her country and mourned her knee injury that ended the military life that she loved. Ashley was always passionate about whatever she was involved in, whether it was the Marines, a job, her kids, or her church. She was all in. She had a very strong Christian faith and would tell anyone who would listen about Jesus. Ashley always wanted nothing more than to be a mother and raise kids, but challenges in her life kept her from enjoying that dream. She made sure her children were protected, safe, cared for and loved by guiding angels in this life. Ashley’s smile added a sweetness to telling it like it is. She was one of a kind. She became a donor and has saved lives this week. Ashley is survived her mother, Debra Harmon (Springville), four beautiful children that share her sweetness and tenacity, Destiny Potter (Virginia), Makaila and Trevor Smoke (Lehi) and Maleigha; sisters Cally (Todd) Migliaccio, Wendy Woolstenhulme and Danielle DeMarco (Casey Roberts); brothers, Glade (Harold) Woolstenhulme, Shad Woolstenhulme, Tyler (Kasey) De Marco, and Klint De Marco. She is preceded in death by her father, Valjo Woolstehulme, brother Kolby De Marco, and cousins Curtis Edwards and Jordan Migliaccio. Viewing will be held at Premier Funeral Services on July 18, 2019 at 12:00 Noon in Orem 1160 North 1200 West Orem, UT 84057. Parking is limited. a graveside service will follow at Provo Cemetery at 2pm. 610 South State Street Provo, UT 84606. In lieu of flowers- there is an account set up at Bank of American Fork if you would like to donate to her children's future. Call 1-800-815-BANK for information on how to contribute, ask about the "Fund for Ashley Woolstenhulmes family". Routing # 124301025.

The family of Ashley June Woolstenhulme created this Life Tributes page to make it easy to share your memories.