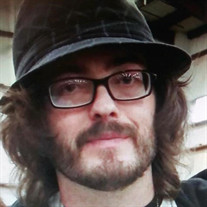 Austin Royal McCoy 1986 - 2022 Austin Royal McCoy passed from this earthly realm on April 25th, 2022 at age 35. He was born on July 24th, 1986 in Nampa, Idaho. He was preceded in death by his father, Steven F. McCoy. He is survived by his former wife, Jill (Duncan) Reller and their daughter, Madison McCoy. He is also survived by his mother, Debra (Bowen) McCoy and nine siblings: Amby Bowen, Naomi (Craig) Sanderson, Ryan McCoy, Daisy Nadjem, Forrest (Becky) McCoy, Landon McCoy, his twin sister, Molly (Jeff) Cook, Wesley McCoy, and Keenan (Sarah) McCoy as well as many nieces and nephews. Austin loved God. At age eight, he was baptized a member of The Church of Jesus Christ of Latter-Day Saints. He was consistently involved in activities and projects associated with his church and the scouting program. He began performing priesthood duties at age 12 and continued to serve and love his fellow man through the remainder of his days. At age 15, Austin started his first job as a farm laborer. His first day earned him a high starting wage due to his impressive work ethic. Austin took great pride in his work and strove to shine in all he did. He was always excited to start a new job and learn something new. He loved to work hard and it was reflected in his various fields as maintenance worker, recycling sorter, food service, and warehouse worker. He was always looking to bring fun and laughter into any situation. Austin attended Jordan High School, competed on their swim team and made many friends, in and out of the pool. He graduated from South Valley High School. Austin participated in the Special Olympics and earned multiple medals. Austin suffered brain trauma at 17 which drastically changed his way of life. He thereafter became part of the North Eastern Services family for the next 16 years as a client of the SLC branch. He was loved and will be missed by a plethora of administrative staff, caretakers, and peers. We extend a special thanks to NES as well as U of U medical staff and state workers who cared for him for the last 16 years. Austin’s heart belonged to his daughter, Madison. This was apparent to all who knew him. He sought every opportunity to be with her and express his love and desire to provide her the world. He often called his family members just to talk, see how their life was and share about his. He was always ready to spend his time and talents to help them and make their lives easier. Nieces and nephews lined up to get tossed in the air, and he was happy to do it every time. He inspired one of his sisters to create a healthcare consulting practice. Austin was one who often sought to prove his physical strength, but his truest and greatest strength was the way he lived and loved. He will stay in our hearts and in our thoughts until we meet again. Funeral services 11:00 am, Saturday, May 7, 2022 at the Quail Hollow Ward Chapel, 9245 South Quail Run Drive, Sandy, UT with a viewing prior to services from 9:45 to 10:45 am. Interment and graveside services will be 2:00 pm, Saturday, May 14, 2022 at the Middleton Cemetery in Middleton, Idaho.

The family of Austin Royal McCoy created this Life Tributes page to make it easy to share your memories.