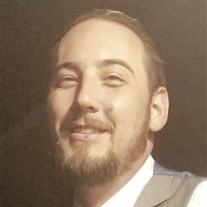 Austin Wayne Spencer 32, was taken from us on Oct. 13, 2018 in Hampton Georgia. He was born June 23, 1986 to Fredrick Wayne Spencer and Kristin Sorenson Spencer in Ogden, Utah. Austin was raised in Roy and Clinton. He attended Roy High School where he was active in the Roy High School Chamber Choir. After graduation in 2004 he enlisted in the United States Navy and served for 8 years, while serving he adopted his nickname “Lunchbox” for the amount of food he could eat. Shortly after enlisting he was made a Corpsman and was attached with the Marines when he served in Iraq. He attended Stevens Henegar Technology College for his Surgical Tech degree. After moving to Georgia, he was attending Southern Crescent Technology College for his Bachelors in Business Administration. While attending he made the Presidents List his 1st quarter and was on track to get it again in his 2nd quarter. He was very active in his church Trinity Family Worship Center and enjoyed doing services for them. Austin was a caring, helpful, smart man who made an impact on many peoples’ lives in his short time here. Austin loved to go duck hunting and cooking the birds he shot. He loved to be with his friends, family, and his children. He was a loving father to his step children Josslyn Hausauer, Dillan Davidson, Tobi Davidson, Faye (Tristian) Davidson and, Anabelle Davidson. He was married to Shaleena Hausauer in September 2009, they later divorced in 2013. He married Gina Hernadez on May 26, 2018 in Hampton, Georgia. He is preceded in death by his grandparents John P. Sorenson, Bobby W. Spencer, Emily N. Spencer and John H. Purser, his aunt Janet Roskelley, and his cousin Brandon J. Winger. He is survived by his mother, Kristin Spencer; father, Fredrick (Carolyn) Spencer, his brothers Cody Spencer (fiancé Jess Hanline), Nick (Sarah Nickerson)Taylor, Matthew (Amber) Taylor, his sister Kaitlyn Phillips, along with his 5 step children, many nieces and nephews, aunts uncles, grandmother and great-grandmother. There will be a viewing on Tuesday October 23, 2018 at Premier Funeral Home, 5335 S. 1950 W. in Roy Utah from 6:00-8:00PM. The funeral will be on October 24, 2018, at Clinton Stake Center, 1288 W. 1300 N. in Clinton, Utah with a viewing from 10:00-10:45AM and the funeral will begin at 11:00AM. The internment will be at the Clinton City Cemetery. Flowers may be sent to Premier Funeral Home at 5335 S. 1950 W. Roy, Utah 84067 There has been an America First Account set up for anyone who would like to donate toward Austin’s services. Account # is 9105917(savings account). Austin’s family would like to thank everyone who has reached out to them with all the kind words about Austin as a person.

Austin Wayne Spencer 32, was taken from us on Oct. 13, 2018 in Hampton Georgia. He was born June 23, 1986 to Fredrick Wayne Spencer and Kristin Sorenson Spencer in Ogden, Utah. Austin was raised in Roy and Clinton. He attended Roy High... View Obituary & Service Information

The family of Austin Wayne Spencer created this Life Tributes page to make it easy to share your memories.