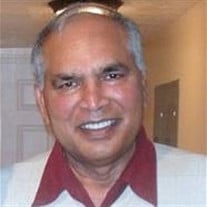 Aziz Jacob 1940 - 2017 Aziz Jacob, cherished husband, father, grandfather, brother, uncle, cousin and friend passed away peacefully at his home on November 25th at the age of 77. Aziz was born in Sialkot, Pakistan on November, 1st 1940. He was the first of his family to graduate from University of Punjab with a Masters degree. He worked as a teacher in Pakistan and traveled to Libya where he worked as a banker until he immigrated to the U.S. in 1976. In the U.S. he became a successful entrepreneur and owned several small businesses. Aziz was a traveler, going to countries all over the world, including, Europe, China, Egypt and Greece. He deeply loved his family and was a fierce advocate of education and hard work. His proudest accomplishment was paving the way for his family to immigrate to the United States, improving their lives forever for generations to come. He was proud to be an American and had a great love for the United States. Our hearts are heavy but we take comfort in knowing that he is at peace and with his Savior Jesus Christ. Aziz is preceded in death by his father, Bernard Sadiq; and mother, Louisa Hakim Bibi Sadiq. He is survived and lovingly remembered by his devoted wife of 16 years, Pamela Jacob; his children Samina (Imran) Ditta, Cecil (Julie) Jacob, Rehan (Kourtney) Jacob, Pascal Jacob, Amber (Dennis) Keel and Ryan (Danielle) Pitt; his brothers and sisters, Francis (Noreen) Sadiq, Anthony (Maureen) Sadiq, Stephen (Erum) Sadiq, Josephine Sadiq, Parveen Hamid, Cecilia Sadiq, Lance Holcomb and Tiffany Holcomb; and his many beloved grandchildren, nieces, nephews, cousins and lifelong friends. Funeral services will be held at St. Vincent’s Church, 1375 Spring Ln, SLC, UT 84117 on Saturday, December 2, 2017. Viewing will be held at 10:00 a.m. – 10:45 a.m.¬ with memorial and mass from 11:00 a.m. – 12:30 p.m. Graveside services and burial will be held after the funeral services at Elysian Burial Gardens, 1075 E 4580 S, SLC, 84117.

Aziz Jacob 1940 - 2017 Aziz Jacob, cherished husband, father, grandfather, brother, uncle, cousin and friend passed away peacefully at his home on November 25th at the age of 77. Aziz was born in Sialkot, Pakistan on November, 1st 1940. He... View Obituary & Service Information

The family of Aziz Jacob created this Life Tributes page to make it easy to share your memories.