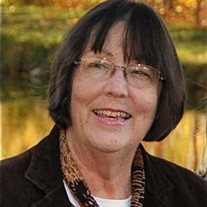 Barbara Brammer passed away in her Salt Lake City home on January 9, 2015, after a swiftly losing battle with brain cancer. She was born in Pasadena, California, on June 13, 1938, to Howard William Wallace and Vera Bursill. Succeeding high school and employment at various locations in California she attended Brigham Young University, where she in 1966 graduated with a BA in English accompanied by a teaching certificate. Employed in Tabiona by Duchesne County School District in 1968 she married Erik S. Brammer and moved the following year to Sweden, where she with her husband partially made a living on academic proofreading and scientific translation besides raising a family. She eventually was employed in Swedish health care. After 30 years she returned to the U.S.A., where she settled in Salt Lake City working for Shriners Hospital for Children until her retirement in 2012. Barbara is survived by her husband Erik Brammer, her son John-Erik Brammer and her daughter Natalie Jansson in addition to 5 grandsons and 5 granddaughters. Friends are welcome to visit with family on Thursday, January 15, 2015, from 6:00 to 8:00 PM as well as on Friday, January 16, 2015, from 12:00 to 12:40 PM at LDS Harvard Ward, 700 S 500 E in Salt Lake City, UT, after which funeral services will be held at 1:00 PM at the same location. Burial will be undertaken at Salt Lake City Cemetery. In lieu of flowers a contribution to AML Research at Huntsman Cancer Center would be most welcome. Barbara's family wishes to express its deep gratitude for the diligent, competent, professional, and loving care she received at Intermountain Medical Center, Huntsman Cancer Institute, Mission at Hillside Rehabilitation Center, and iCare Home Health & Hospice. All the persons having been involved are indeed the cream of the crop produced by American state-of-the-art health care. They are regrettably too numerous to be individually listed in this space. Note: Due to limitation in time in a trying situation like this, the above obituary has been condensed to an extreme. However, a lengthier summary of Barbara's life is being planned to appear on this same site in a near future.

Barbara Brammer passed away in her Salt Lake City home on January 9, 2015, after a swiftly losing battle with brain cancer. She was born in Pasadena, California, on June 13, 1938, to Howard William Wallace and Vera Bursill. Succeeding... View Obituary & Service Information

The family of Barbara Elizabeth Brammer created this Life Tributes page to make it easy to share your memories.

Barbara Brammer passed away in her Salt Lake City home on January...