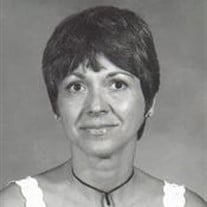 Barbara Ann Chanson Born in Boise, Idaho on April 16, 1933 to Frank and Ann Chanson, she left this hard world behind in West Valley, Utah on August 27, 2012. Married Charles R. Hards, later divorced. Survived by younger sister Catherine Ellison (Jack) Salt Lake City; son Charles M. Hards (Kelly), West Valley City; daughter Barbara Ann Hards, Moab Utah; daughter Margaret Hards, Salt Lake City; son David Hards, Las Vegas Nevada; daughter Catherine Hards, West Valley Utah. Her youngest sister Marylin Chanson passed as a teenager in Salt Lake. She also had 4 grandchildren whom she loved dearly and delighted in: Aerowyn Galer, Brittany Hards, Ian Groo, & Whitney Hards. In addition to raising 5 rambunctious kids, Mom was a lifelong Anglophile, artist, philatelist, and an avid garderner. In her later years, she derived great pleasure from working in her various flower beds and gardens, and seeing all the beautiful blossoms and blooms. She was a voracious reader of many genres, including politics, mysteries, classic literature, and even children's books. She loved Dr. Who, classic movies, English comedies, and had a great interest in rocks and gems. She was a talented, prolific painter working in oils and produced many impressionistic landscapes over the years. But during her entire life, her greatest pleasure and passion was watching her children and grandchildren grow and live their lives. Everyone who met her will never forget her. Strong of will and always determined, she leaves a huge hole in the lives of those who love her. We'll see you again one day, Mom. Cremation has taken place. A memorial service will be held at a later date.

The family of Barbara Ann Chanson created this Life Tributes page to make it easy to share your memories.