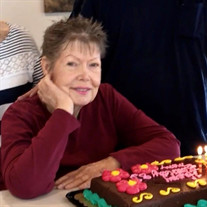 Halene passed away at the age of 85 of Covid. Halene was born April 30th, 1936 at LDS Hospital in Salt Lake City. She was the daughter of Harold Wall and Estella Fawn Chapman. Her father died a few months prior to her birth. She was raised by her loving mother with the help of three older brothers and a sister. Her childhood was a very happy one. She had a lifelong love of her childhood home in Garfield, Utah. She and her best friend Dixie Obray remained life-long friends. She wrote a poem about Garfield that was published in the Tribune. Her teenage years were spent in Hollywood, California. She married John Joseph Crist on Christmas Eve at the age of eighteen. A year later, a daughter Diana was born, three days after Christmas. She later divorced. She relocated back to Utah and married Roland (Sonny) Gomez. Two children were born from that union. Ron and Ryan Gomez. She later divorced. Her third marriage was to Clifford R. Johnson. Their marriage lasted almost twenty years until his death. She was very happy and content in this union. As a young adult in Hollywood, she became a hair stylist. She won an award and trophy as a wig stylist in Hollywood. She was very artistic and had many talents. She did oil painting, poetry, made furniture, tried glass blowing, made porcelain dolls, etc. She never lost her artistic talent or love for art. Many of her nieces and nephews thought she was the most beautiful young woman they had ever seen. She was extremely intelligent as all of her siblings were. At times though, many wondered, “What happened to her common sense?” 😊 She will be dearly missed by her children, grandchildren, great grandchildren, sister, cousins, nieces, nephews, and friends. She is survived by two children, Diana Crist Wiseman and Ronald Douglas Gomez. She was blessed with nine grandchildren and nine great grandchildren. In addition, a sister, B. Darlene Harris. She had a very close relationship with her niece Terry Harris Nelsen, whom she loved dearly. She was preceded in death by her parents, son Ryan Blaine Gomez, brothers Keith Wall, Blaine Wall, and Douglas Wall. Also, infant sister Janice Wall. We believe our mother will be having a wonderful reunion with family, in addition to a father and sister she has never met. In Celebration of Halene’s Life, A Viewing Will Be Held at Premier Funeral Services 67 East 8000 South Midvale, UT. 84047 On Monday, October 11th from 6-8 P.M. Tuesday: Viewing at Premier Funeral Services from 10-11 A.M Tuesday: Graveside Service at Elysian Gardens 12-1 P.M 1075 East 4580 South Millcreek, UT.

Halene passed away at the age of 85 of Covid. Halene was born April 30th, 1936 at LDS Hospital in Salt Lake City. She was the daughter of Harold Wall and Estella Fawn Chapman. Her father died a few months prior to her birth. She was raised... View Obituary & Service Information

The family of Barbara Halene Wall Johnson created this Life Tributes page to make it easy to share your memories.

Halene passed away at the age of 85 of Covid. Halene was born...