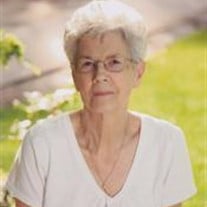 Barbara Ann Moore Black was born December 23, 1933 in Forrest City, North Carolina to Johnnie Grace Smith Moore and William Breaker Moore. She was the youngest of 5 children. As a child Barbara loved being outside. She said that she was the tom boy of the family and while her sisters were doing "girlie things" Barbara would be out climbing trees or playing in the dirt. Her sisters nicknamed her "Rusty" because she always had red dirt around her neck and ears. Barbara ("Bobbie") married Leo Ross Black ("Blackie") March 26, 1949 and began the life of a Coast Guard wife. They traveled and raised their family in Hawaii, Florida, Virginia, Connecticut, Alaska, Massachusetts, and Oregon. Barbara was always adventurous and an avid outdoors person. She loved her family, wide open spaces, pine trees, light houses, birds of all kinds and a sandy beach along any coastline. If we couldn't find Bobbie and Blackie at home we knew they were out crabbing on the Oregon coast or fishing the Umpqua River. Her love of seafood began when Blackie was stationed in Kodiak, Alaska. She camped in the wilds from Alaska to Nova Scotia. Barbara traveled the Trans Canadian Railway, sailed the Panama Canal, and drove the Alcan Highway many times. Barbara passed from this life to the next Christmas morning 2012, after enduring a courageous 18 month battle with Mesothelioma. She was preceded in death by her husband of 55 years, her parents, sister Frances and brother William. Barbara is survived by her daughter Pamela White of Mountain Home, Idaho and her son Steven Black (Debbie) of Syracuse, Utah, sisters Doris Posey of Burlington, Vermont and Ruby Austin of Portsmouth, Virginia, 9 grandchildren, numerous great grandchildren, nieces and nephews. She will be greatly missed and leaves us a loving legacy. Memorial donations may be made to The American Heart Association, Juvenile Diabetes Research Foundation or your local public library. A very special thanks to Chancellor Gardens and Inspirations Hospice for making her last few months as comfortable as possible. A memorial service will be held Saturday, January 5 at 1:00 at the Clearfield Community Church 200 S 500 E Clearfield, UT 84105.

Barbara Ann Moore Black was born December 23, 1933 in Forrest City, North Carolina to Johnnie Grace Smith Moore and William Breaker Moore. She was the youngest of 5 children. As a child Barbara loved being outside. She said that she... View Obituary & Service Information

The family of Barbara Ann Moore Black created this Life Tributes page to make it easy to share your memories.