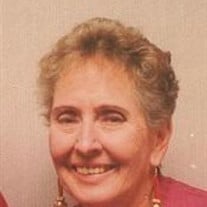 Barbara Jean (Clark) Rasmussen passed away peacefully on September 1, 2015. She was born November 24, 1929 in Lynndyl, Utah to Albert and Zoe Clark. She grew up in Springville, Utah and graduated from Springville High School. She was married to Richard DeVere Rasmussen on December 25, 1953 and they were later sealed in the Salt Lake Temple on November 24, 1964. They were married for 62 years and were always together. They traveled around the country and spent many winters in Laughlin Nevada and Las Vegas. They had five children, Randy (Pam), Tom (Diane), Bob (Kristie), Ron (Wendy), and Robin. Barbara was a very loving and nurturing mother to her children. She was very supportive and always wanted the best for each of them. Barbara enjoyed being a waitress and began working at her parent’s restaurant in Springville called the Chicken Roost at a young age. She also worked for many years at the Grandview Café. She had a beautiful voice and loved to sing. She, her mother, and her aunts enjoyed standing around the piano and singing the songs of the day. Barbara was a lifetime member of the Church of Jesus Christ of Latter-day Saints and served faithfully in many callings including Primary President. She enjoyed singing in the choir and was a very faithful choir member. Barbara is survived by her Aunt Norma and Uncle Virge, her loving husband Richard, their 5 children, 19 grandchildren, and 40 great grandchildren. A graveside service and interment will be held on Saturday, September 5, 2015 at 10:00 a.m. at the Lehi cemetery, 1100 North 400 East, Lehi, Utah.

Barbara Jean (Clark) Rasmussen passed away peacefully on September 1, 2015. She was born November 24, 1929 in Lynndyl, Utah to Albert and Zoe Clark. She grew up in Springville, Utah and graduated from Springville High School. She... View Obituary & Service Information

The family of Barbara Jean Rasmussen created this Life Tributes page to make it easy to share your memories.