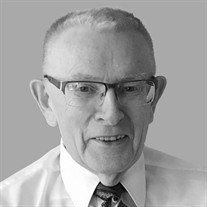 Basil Heber Dunn passed away peacefully on September 2, 2018. He was born on March 17, 1929, in Birmingham, England to Norman and Florence Bradsell Dunn. He attended Church of England schools and the Birmingham School of Music. He played the piano, trumpet, and violin. He received a full scholarship to Brigham Young University at the age of 16. He emigrated to the United States with his parents following WWII to attend BYU. Upon arriving in Provo, he met and fell in love with the beautiful lady who had become his pen pal during the war. He and Mary Jewell Goates were married on October 3, 1949 in the Salt Lake Temple. Shortly thereafter, he returned to his homeland in the British Isles to serve a mission for the Church of Jesus Christ of Latter-day Saints. Upon his arrival home, he was introduced to the first of his seven children, Rosemary (Hyrum) Mead. Six more children followed: Conrad (Jan), Michael Elijah, Cassandra, Julie (James) Hill, Madeleine (the late Dennis) Swapp, and Jonathan. He and his wife have seven grandchildren and ten great grandchildren. He was preceded in death by his wife, Mary Jewell; one son, Michael Elijah; a son-in-law, Dennis Swapp; his brother, Melvin (Joyce) Dunn; and three sisters: Norah, Margaret (Ferrell) Massey and Faith (Arthur) Fisher. He enjoyed history, music, art, and riding his bicycle across the countryside of England, often for days at a time. He spoke French, Latin and Portuguese. He loved his native country, of which he had many happy memories. He later became a naturalized citizen of the United States, which he called home. He served in many callings in the Church. Teaching Gospel Doctrine and being choir director brought him the greatest joy. Above all else, he loved teaching, as reflected in both his church and his professional life. Services will be held in the Orchard Hills Ward building 949 North 540 West, American Fork, on Saturday, September 8th at 11:00 a.m. Friends may call prior to the funeral from 10:00 - 10:45 a.m. and on Friday evening at the same location from 6:00 - 8:00 p.m. Interment to follow at the American Fork Cemetery, 26 West 600 North Street, American Fork, Utah.

Basil Heber Dunn passed away peacefully on September 2, 2018. He was born on March 17, 1929, in Birmingham, England to Norman and Florence Bradsell Dunn. He attended Church of England schools and the Birmingham School of Music. He played the... View Obituary & Service Information

The family of Basil Heber Dunn created this Life Tributes page to make it easy to share your memories.