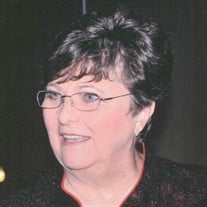 Hooray for Becky! After living 77 years, she has passed away, to be reunited with her mother, father, brother and several other relatives and friends. She had so many friends that it was said, "We can't take her any place that she didn't meet someone she knew, including when we took her out of state." She was a joy to be around and saw only the good in others. She loved to dance, but said she had two left feet , liked to write, but couldn't spell, loved food, but couldn't cook, and if you said 'road trip' she was the first to say yes. Mom enjoyed camping, river trips, reading, sewing, (making fantastic costumes for grandchildren's plays), and cross-stitching needlework. Becky was born to Abner and Vivian Jones on June 16, 1944, in Salt Lake City. She had two brothers, Denny and Kent Jones. When she was 11 years old, her father died at a softball game, leaving her mother a widow for 45 years. She grew up around friends and family in the 15th ward area, on the west side, until the freeway took most of the homes in the neighborhood. The years growing up there were the best of times. Learning to use imagination to have fun with family and friends. She attended Franklin Elementary, Jackson Jr. High, and West High school, class of '62. After graduation she worked at Zions Bank until she was married to Bruce R. DeHaan, later divorced. She also graduated from Salt Lake Community College (1980). Worked at Jordan School District for 30 years. She was active in The Church of Jesus Christ of Latter-day Saints, holding many positions in Primary, Young Women, and Relief Society. Her favorite assignment was a teacher. She had a strong testimony with faith never wavering. Becky raised six children as a single parent. When asked how she did it, he only comment was, "the angels helped me, both mortal and immortal." She is survived by her children: Brent (Renee) DeHaan, Brad (Meg) DeHaan, Bryan DeHaan, Blaine "Ralphy" DeHaan, Brenda (John) Jex, and Brandon (Sheyleen) DeHaan, with 19 grandchildren. Her brother Kent Garner Jones and Denny preceded her in death. Funeral services will held at 11:00 am, Friday, December 3, 2021 at River 5th Ward, 1380 West 6785 South, West Jordan. Viewings will be held from 6-8:00pm on Thursday and 10:00 am on Friday, both at the church. Interment to follow at the Salt Lake City Cemetery, 200 'N' Street, Salt Lake City, Utah.

Hooray for Becky! After living 77 years, she has passed away, to be reunited with her mother, father, brother and several other relatives and friends. She had so many friends that it was said, "We can't take her any place that she didn't meet... View Obituary & Service Information

Hooray for Becky! After living 77 years, she has passed away,...