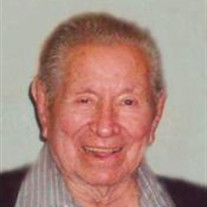 " Dancing in Heaven Again With his Angels" 1924-2013 Our beloved Father, Grandfather and Great Grandfather, brother and friend returned to the grace of God on January 6 , 2013.Bel was born on December 30 , 1924 to Benigno & Caroline Varoz in El Rito New Mexico. Bel joined the U.S Marine Corps in 1942 and was honorably discharged in 1946. He was very proud to have served his country in W.W. II. He earned his associates degree in barbering in 1948, owned and operated his business Bel's Barber Shop for 33 years. Bel married Tilly Soria and together they had a son, Daniel. They later divorced. In 1956 Bel married Mary D. Lopez, the love of his life! Together they had 8 children. Family was the most important thing in Bel's life. He also enjoyed family camping trips, gardening, traveling and dancing the night away with his loving wife. He especially enjoyed spending time with his grandchildren. He thought they were the cutest,smartest and most amazing. After retirement Bel enjoyed working at Kearns St. Ann's School, the children all knew him as "Mr. Bel". Preceded in death by his parents, wife, daughter Denise Varoz Jones and Grandson Tony Varoz. Survived by Daniel ( Diane) Bel Jr. (Lori), Karleen Mitchell (Kim), Matthew (Susan), Michelle Crooks (Robert), Renee Varoz-Tuke, Ronnie (JoLynn) and Mark. 29 grandchildren and 13 great grandchildren,Two brothers and four sisters, nieces and nephews. A viewing will be held Sunday January 13, 2013, from 6:00pm-7:00pm with Vigil Services to follow from 7:00pm-8:00pm @ St.Ann's Catholic Church on 2100 S. 500 E. A Funeral Mass will be held on Monday January 14, 2013, 11:00 am . Interment at Mt. Calvary Cemetery, 275 North “T” St., SLC, UT. The family gives thanks to the Mt. Olympus Care Center and a special thanks to Carole with the CNS Hospice Services.

" Dancing in Heaven Again With his Angels" 1924-2013 Our beloved Father, Grandfather and Great Grandfather, brother and friend returned to the grace of God on January 6 , 2013.Bel was born on December 30 , 1924 to Benigno & Caroline Varoz... View Obituary & Service Information

The family of Belarmino E Varoz Sr. created this Life Tributes page to make it easy to share your memories.