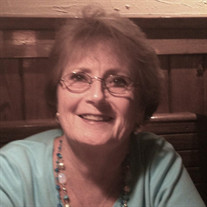 Belinda Lee (Broadwater) Blackburn passed away on Friday, August 3, 2018 at her home in Riverton, Utah, after a valiant battle with cancer. A funeral service will be held in her honor on Saturday, September 15, 2018 at 11:00 am. The service will be held at the LDS Church Building, 1208 West 12400 South, Riverton Utah 84065. Belinda, known as Binnie to her friends and family, was born in Glendale, California on May 18, 1948 to Ralph and Beverly (Evans) Broadwater. She graduated from John Burrows High school in Burbank, California in 1966. She attended Brigham Young University and later earned a Medical Assistant Certificate. She married Don E. Blackburn in the Los Angeles LDS Temple on July 19, 1968. They began their marriage in California and had three children. They moved to Price, Utah in 1978 to open their own paint store. She also worked with special needs children at Mont Harmon Jr. High. She said this was her favorite job and loved the kids she worked with. She went on to later live in Sandy, Utah and Lexington, Kentucky. They settled in Riverton, Utah in 2008. She had a kind heart, was a fantastic seamstress, and could make any kind of craft or jewelry. Most of the crafts she made were given away to friends and family. She loved to make things and give them to others. She was a member of The Church of Jesus Christ of Latter Day Saints and loved being a Visiting Teacher for her church. She loved shopping with her granddaughters and going to lunch with friends. She enjoyed dressing up and going to dinner and a movie with her husband. She liked swimming with her grandchildren and hosting big family dinners. She is survived by her husband, Don Blackburn and her three children Jenny (Ian) Humes, Mark (Tawnya) Blackburn and Amy (Richard) Kearl. She is also survived by her grandchildren; Jacob, Emily and Nathan Humes; Josie (Andy) Paulson, Morgan and Natalie Blackburn; Shaylee, Aubrey, Chancelor and Rodney Kearl and her great grandchildren, Winston and Harrison Paulson. She also leaves behind her sister Melissa (Philip) Hartung and many nieces and nephews. She was preceded in death by her parents Ralph Broadwater and Beverly (Don) Cressey. She will be missed by all who knew her and we look forward to being with her in our Father’s Kingdom once again. The family feels so blessed by and appreciate the outpouring of love from friends and family. We are grateful that our wife and mom is no longer bound by the physical pain of her earthly body. Until we meet again. Matthew 11:28, “Come unto me, all ye that labour and are heavy laden and I will give you rest.”

Belinda Lee (Broadwater) Blackburn passed away on Friday, August 3, 2018 at her home in Riverton, Utah, after a valiant battle with cancer. A funeral service will be held in her honor on Saturday, September 15, 2018 at 11:00 am. The service... View Obituary & Service Information

The family of Belinda Lee Blackburn created this Life Tributes page to make it easy to share your memories.