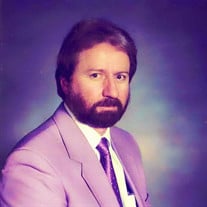 Benjamin Frederick Bullough May 24, 1942 - March 25, 2022 Early on the morning of March 25, 2022, our beloved Father, Husband and Grandpa, Benjamin Frederick Bullough passed away peacefully at home after a long battle with dementia. Ben’s loving wife and caretaker RaNae Madsen and his daughters Kelly and Shelly were by his side. Ben was born to Helene Webb Bullough and Benjamin Bullough. On May 24,1942 in Salt Lake City, Utah. As a young boy he enjoyed traveling with his parents, which led to his life-long love of trains, cameras and photography. Ben attended and graduated from South High in 1960 and later went on to study at Westminster College and finished his Master's degree at the U of U. In 1965 Ben married Carolyn Owen and had five children who they adored, Ben, Shelly Kelly, Bret and Brandon. They later divorced. Ben married RaNae B. Madsen on October 19, 1984. RaNae had two sons Kenyon and Bryan Madsen. Ben and RaNae were married for 37 years and share many happy memories. Among some of their favorites were traveling with Ben’s brother Boyd and his wife Elsa, going to the movies and enjoying a good meal. Dad was a warm hearted, caring and passionate man who loved demonstrating science experiments with his children. Ben enjoyed the great outdoors and cherished taking his kids camping and sledding when they were younger. He loved being with his children and grandchildren on special occasions. Ben was a member of the Church of Jesus Christ of Latter Day Saints. He was called to serve in the LDS Central British Mission from 1962-1964, and often spoke of this wonderful time. Throughout his life Ben served in numerous callings within the church, his favorites were in the scouting program and in his later years as a Temple worker. Ben, being a kid at heart, enjoyed being around the youth. In his years of service with the Boy Scouts of America Ben made lifelong friends. He reveled in adventure, science and the opportunity to be an influence for good. Ben earned numerous medals including the Silver Beaver, a council-level distinguished service award of the Boy Scouts of America, given at a National Court of Honor. As a young man Ben had jobs working at a movie theater and Eckers a camera store in Salt Lake City. When the Vietnam war broke out Ben joined the Coast Guard with whom he had the opportunity to serve in California and Alaska. After returning home to Salt Lake City Ben pursued teaching. Ben’s 32 year teaching career was enjoyed at Millcreek Elementary School. He taught 6th and 3rd grade. He was very passionate about reading. Some of his favorite books were The Hobbit and The Lord of the Rings series by JRR Tolkin, Gandalf was his favorite character. Ben also loved Star Wars, a good movie and comic books, he even owned a comic book store at SouthTown Mall. He passed his love of Tolkin, trains, Star Wars and comics on to his children and grandchildren. Ben is survived by his loving wife RaNae B. Madsen, children Benjamin Frederick Bullough II (Jamie), Shelly Stoddard (Jared), Kelly Topham (Shannon), Bret Bullough (Casey), Brandon Bullough, Kenyon Madsen, Bryan Madsen (Martha) and 24 grandchildren and 17 great grandchildren. He was preceded in death by his parents Benjamin Bullough, Helene Webb Bullough, older Brother Boyd Benjamin Bullough and Son-in-law Jared Lee Stoddard. Our sincere appreciation goes out to the compassionate hospice and home health care workers at Applegate. We are so grateful for their kind service and support in caring for Ben. A gathering will be held for friends, family and those Ben influenced on Friday April 1st from 6:30-8:30pm at the Church of Jesus Christ of Latter Day Saints located at 3120 West 4700 South, West Valley City, Utah. Graveside services will be a private event at a later date.

The family of Benjamin Frederick Bullough created this Life Tributes page to make it easy to share your memories.