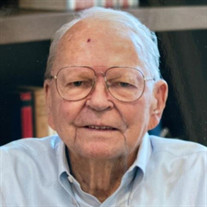 Benson Lewis Hathaway, 95, passed away peacefully at home on June 28, 2020 while preparing to meet with his Sunday study group. The fact that he continued to organize and participate in church and dominoes groups until the end speaks to his desire to live each day to the fullest. He departed this world without delay, suffering, or hospitalization; a deserved finale to a well-lived life. Ben was born to Lewis Fay Hathaway and Ruth Miriam Benson on May 9, 1925 in Salt Lake City, Utah. While growing up during the Great Depression, Ben learned the value of hard work and essentially provided for himself from the age of 14 by working various custodial, delivery, and grocery jobs. As a boy, he scavenged the neighborhood collecting wood scraps and used nails to build scooters, go-carts and other toys. His interest in creating things eventually evolved into a career as a general contractor, designing and building many eclectic custom homes in Utah, Washington, and Illinois. Ben was also a gifted teacher who was able to bring out the best in his students – treating all with respect and earning the same in return. He designed some of the first home building programs in the school districts where he taught, and coordinated river-rafting and backpacking trips for his students during the summer. Having excelled in various sports at East High and the University of Utah, Ben was invited to coach while also teaching his drafting classes. Particularly rewarding for Ben was leading the Skyline High School track and field team to its first state championship win. Ben never shied away from a challenge. On a dare, he asked a childhood friend, Florence LaRue Maw to the Young Republicans’ dance at the University of Utah for their first date. At the time, LaRue was the daughter of Democratic Governor Herbert B. Maw. Ben’s fun-loving personality was apparently irresistible to LaRue, because they eventually married in the Governor’s Mansion on December 28, 1948, and were later sealed in the Salt Lake Temple on June 22, 1949. For several summers, Ben and LaRue managed the Moon Lake Resort where they taught their children how to work and play hard. Ben especially enjoyed taking pack trips into the high Uintas to fish its pristine lakes, and found great joy in the simple pleasures of life. He could make even the most mundane activity an adventure – even a trip to the city dump! In 1969, Ben took a job that required his family to move across the country to Illinois. Although initially met with resistance by some, Ben quickly turned it into another “adventure,” and the six years spent in the Midwest were defining ones for the entire family. Most recently, Ben embarked on one last great adventure – a visit to his daughter in Lima, Peru. According to the aviation tour company guide, Ben, at age 94, was the oldest person they had ever flown over the Nazca Lines, which he thoroughly enjoyed. Early in life, Ben developed a great appreciation for music. Blessed with a beautiful singing voice, he participated in various quartets and chorales, and taught himself to play the harmonica and guitar. These skills were further honed while serving in the Marines during WWII, when Ben and some friends performed for the troops while stationed in Texas, North Carolina, and California. Besides singing memorable renditions of “Detour” and “Blood on the Saddle,” Ben was equally adept at the classics, and especially enjoyed performing “The Trumpet Shall Sound” at the Messiah sing-in at the Brighton LDS Chapel for many years. Ben and LaRue were a great team, supporting one another – as well as their children – in a myriad of productions and activities, and instilling in their posterity that same love of and gratitude for beautiful music. In 1986, both of their lives changed dramatically when LaRue suffered a brain aneurysm. For over 30 years, Ben patiently and lovingly cared for her until she died in 2017. Shortly after LaRue’s aneurysm, they moved to their cabin in Brighton, where they lived for several years. Family get-togethers at the cabin were a common event, and many wonderful memories were made. Ben and LaRue loved living in Big Cottonwood Canyon, and made many life-long friends while there. Ben served faithfully in many callings in the Church of Jesus Christ of Latter-day Saints. In fact, the essence of Ben’s life was his devotion to the Savior and his love of God and his neighbor. He loved unconditionally, and was a source of strength and stability to his family and friends. He will be greatly missed. Ben leaves behind his children; Ann (Richard) Gillespie, Amy Christensen, Jane (Mike) Stout, Ben (Laurie) Hathaway, Jr., and Russell Hathaway; sister, Beverly Ellis and brother, Paul Hathaway; 16 grandchildren and 41 great-grandchildren. He is preceded in death by his parents; wife, LaRue; sister, Bonnie; and great-granddaughter, Samantha. A viewing will be held on Wednesday, July 8, 2020 at the LDS church on 4032 South 2300 East (directly west of Olympus HS) from 9-10:30 a.m. with the funeral directly following at 11:00 a.m. In accordance with current Salt Lake County health requirements, we ask that you please wear a mask. The Hathaway family wishes to extend our deep gratitude to the caregivers at the Abbington/Spring Gardens Assisted Living Center for their loving care of Ben and LaRue over the last few years, as well as to his many dear friends there. In lieu of flowers, please consider contributing to the LDS Missionary Fund or another favorite charity. Better yet, just go do some good in Ben’s memory!

Benson Lewis Hathaway, 95, passed away peacefully at home on June 28, 2020 while preparing to meet with his Sunday study group. The fact that he continued to organize and participate in church and dominoes groups until the end speaks to his... View Obituary & Service Information

The family of Benson Lewis Hathaway created this Life Tributes page to make it easy to share your memories.

Benson Lewis Hathaway, 95, passed away peacefully at home on...